When disaster hit Haiti, everyone heaved to, and I tried to travel down there to lend a hand. In the end, I could only blog about it from home. Disappointing. Now that an earthquake and tsunami have hit Japan, do we feel any corresponding sense of sympathy? 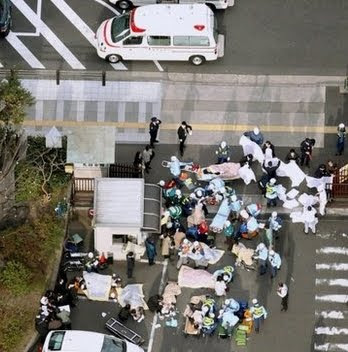 Looking at this photo of emergency medical services at work in Japan and others from the BBC, I was struck that my own reaction was actually that "this is what Japan is like" and "oh, another earthquake in Japan: it must be annoying for them."

This is an odd reaction, part of what I think of as the 'godzilla phenomenon'--Japan as the beautiful land of natural disasters. I realize that I think of the Japanese as something like the Eloi from Wells' Time Machine. That is, they live a charmed existence in a sort of Eden, except that they occassionally fall prey to firestorms, nuclear disaster, earthquakes--the metaphorical godzilla. I realize this isn't fair to the Japanese

This impression is no doubt supported by the fact that Japanese disasters provide us with no images of wailing and nashing of teeth. A video of a damaged store in Japan shows workers calmly cleaning up debris while a man goes about his business paying for groceries at the counter. In Haiti, it would have been distraught, helpless owners and looters.

Google has an amazing resource called Google Crisis Response. Finally. After 9-11, I tried to convince my Senators that the US government should have a crisis response web presence. My idea was that in the event of, say, Hurricane Katrina, the government would immediately put up a website at http://www.katrina.gov and collaborate with news agencies to provide ongoing updated information about casualties, volunteering, donating money, etc. To me, this was a no-brainer as it would clear up a lot of confusion. During Haiti relief, a web scam saying airlines were providing free tickets to those wishing to volunteer in Haiti almost took in some co-workers of mine.

The most amazing thing about the Google Crisis Response is their PersonFinder app, which you can imbed in your website. Look for "John," and you'll see how it works. Cool.