Fashion label Louis Vuitton had a show not too long in the past that showcased a new line of leather handbags. The image of the white-clad nurse was used to set off the cases. Since there hasn't been a revival of anything fashionwise related to the nursing uniform, I can only imagine that the point was to draw attention to the bags' similarity to old-fashioned medical bags and, in drawing attention itself, to dispell any criticism of the bags as boringly derivative of the old medical bags. No doubt fashion insiders would have different explanations. 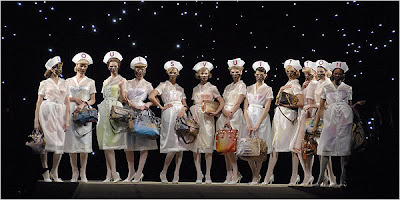 As I mentioned on a previous post of The Sexy Nurse Report series, the white-clad nursing uniform that is ubiquitous in Sexy Nurse imagery remains so because it has social and aesthetic cache. While it's true that presenting nurse imagery of this uniform promotes misguided thinking about the nursing profession, it has remained for reasons other than a desire on the part of the public to think of nurses as "handmaidens" to doctors, etc. It is a powerful visual image in its own right.

Why it should be a powerful image, I am not entirely certain. How did any fashion arise in any time? Fashion is in conversation with its own history at all times but must also give a nod to the aesthetics of the human body as well as functionality and other considerations. As can be seen from the following fashion photo, the white nursing uniform in broad outline is a modern white dress that is still favored today. 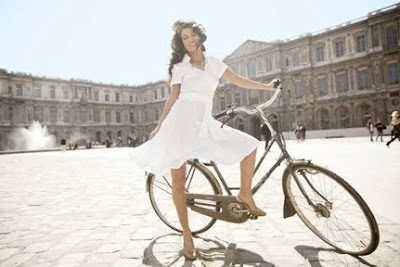 history of the (white) nursing uniform

I don't want to write a lot about the history of the nursing uniform. This is information that is pretty much available to anyone with access to an academic library or the Internet. If you are looking for a good starting point for research, try the dyk2 site and its mirror. These both have lots of photos.

For my purpose, we only need to recognize that in the history of nursing, the white nursing uniform is not a standard. Herewith, a few historical images to make my point. First some period medieval and rennaisance imagery of nurses. 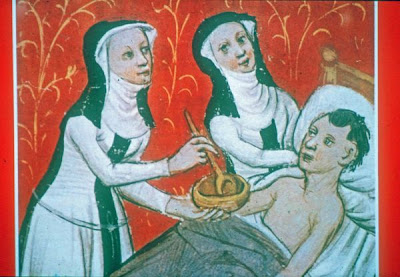 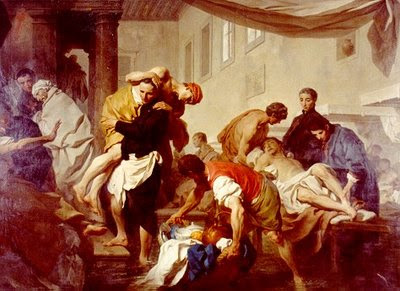 In the WWI era, uniforms tended to be long, cover a lot, and trend toward greys and subdued colors. 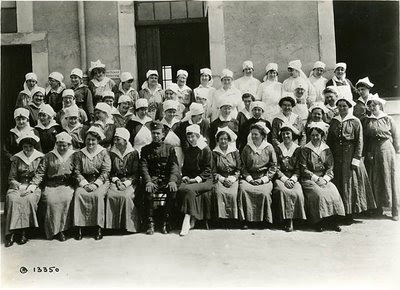 Common in this era was the very unsexy and unfashionable apron. 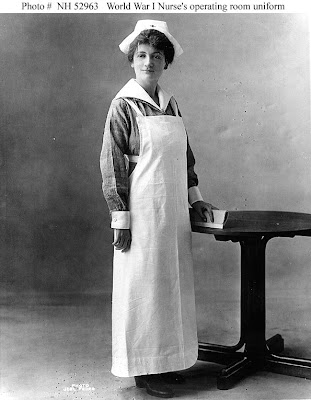 And with this apron, I think we have the origin of the modern image of the white nurse uniform. It is not, as you might imagine, that the white apron turned into a white uniform. Quite the opposite. It is the unfashionableness and lack of visual power in this apron that led to the downfall of this style of uniform. The connection is that WWI saw the nurse used in a national mobilization campaign to support the war effort. Take a look at advertisements from this period. 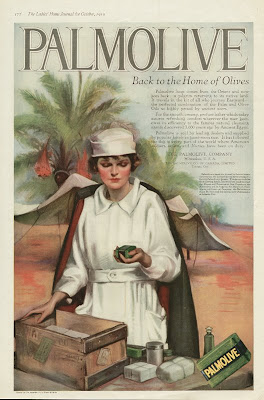 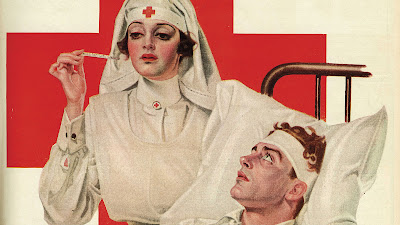 As you can see, advertising images from this period had very little to do with the reality of nursing uniforms like the ones shown in the photos above. The idealized, all-white uniform is simply a powerful visual image created, or at least enlarged and perfected, by advertisements and propaganda of this era.

However, as life imitates art, the images created by artists and advertisements for WWI became the reality of nursing uniforms by WWII. 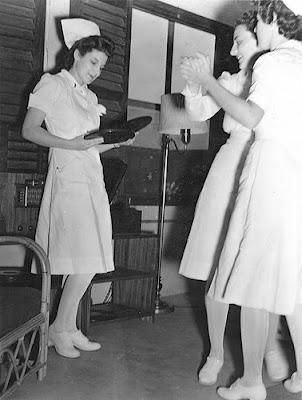 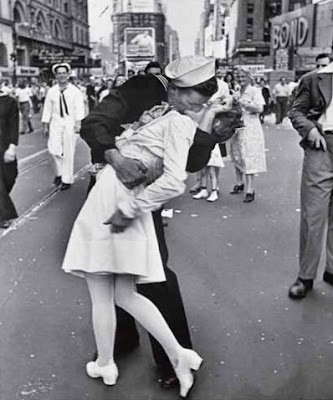 Perhaps it was the widespread use of black-and-white photography and an increased consumption of magazines and media during the post-war era. Whatever the case, from this famous kiss to today, the white dress, stockings, and white cap have been considered the quintessential nursing uniform. The white uniform became "what a nurse wears" in the public imagination. This despite the fact that, as the following photo from the 1960s shows, real nurses continued to dress in a variety of ways. 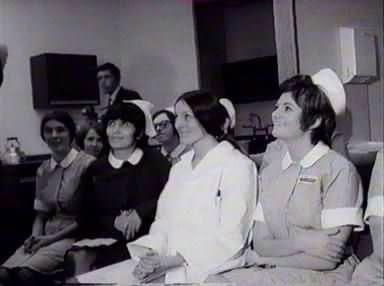 white uniforms in the sexual revolution

As I mentioned in a previous post, the sexual revolution that started in the 1960s resulted in part in a breakdown of the censorship of sex in literature and, eventually, in pop culture, resulting in the free Internet pr0n available to all today. I documented some of the changes brought about by these new standards in my post Sinners in White.

But the changes in censorship did not apply to only books and the printed page. There was a rash of low quality films from this period that highlighted previously forbidden violence and sex. The term "grindhouse films" describes some of this phenomenon, as do the terms "sexploitation" and "blaxploitation," referencing films made on a low budget and meant to attract viewers purely by exploiting prurient interests or the desire of African-American viewers to see their own race and racial themes presented on screen. 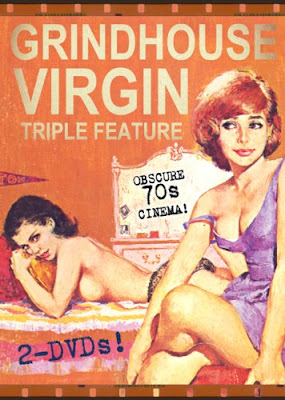 As any man will tell you, the male sexual psyche is an abundance of creative energy. Women in all sorts of roles became sexual characters as well as nurses. (This is in complete conformity with Rule 34, which is a truism of modern media and the male mind.)

As we have seen, the white nursing uniform we identify as a Sexy Nurse Uniform was thought of by the public at this time simply as "how nurses dress." So, it should come as no surprise if sexploitation and the public's perception of nursing resulted in the presentation on film of nurses in sexual situations wearing the stereotyped white uniform. And this is just what we got. For example, the 1970s film The Sensuous Nurse. 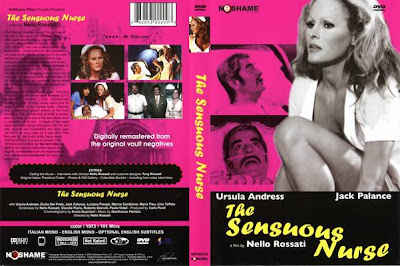 Midnight Blue was a sexploitation TV show that started in the 1970s and ran til 2002. 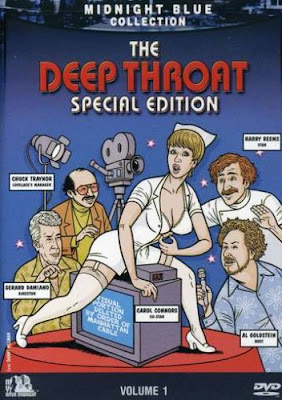 There was even a series of films with Charlie's Angels style Sexy Nurses that ran in the 1970s, starting with Night Call Nurses. 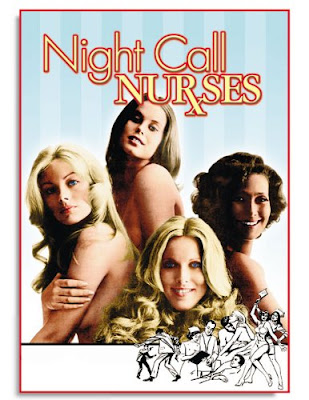 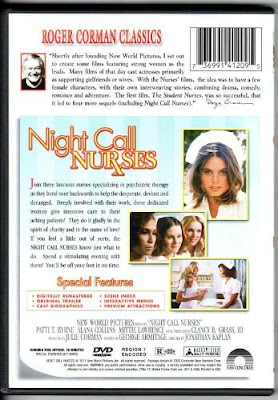 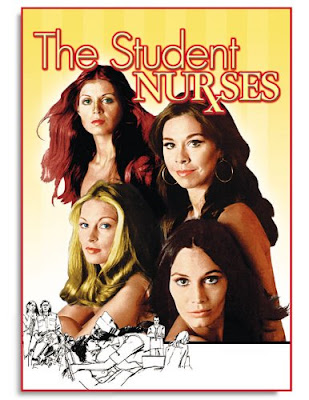 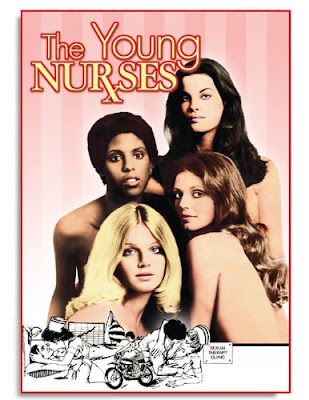 To be fair, films did recognize in a limited degree that nures wore other uniforms. As you can see from this foreign pr0n film, Sexy Nurses can dress in blue as well: 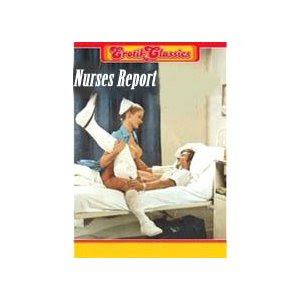 Of course, sexploitation is only one step away from pornography. And we did start to get that as well. Note that in these ealier pornography films, as in Nurses Report above, the plots stay closer to a hospital-based script. This indicates to me that the Sexy Nurse, at this early point in time, was still essentially a fantasy that existed only in men's heads and in the seamy outlets like the occasional adult theatre where these fantasies could be played out. The Sexy Nurse as a nationally recognizable trope or image had not yet entered the general culture. 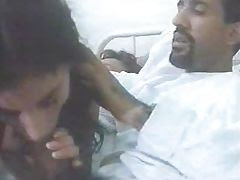 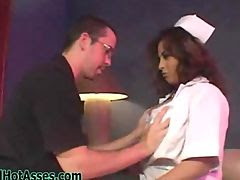 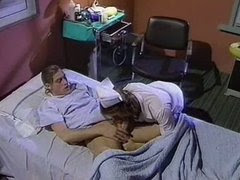 Later in the development of pr0n, the Sexy Nurse became less a fantasy tied to the real world and more a stock character. The plots, likewise, began to stray more from a recognizable hospital script: 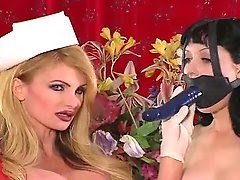 In the present day, the Sexy Nurse is a full stock character, but at the same time, real nurses uniforms have less connection to the Sexy Nurse image. As a result, current pr0n films have taken to modifying the uniform with large medical crosses and red trim indicating the Red Cross color scheme so many identify with health care. These new Sexy Nurse portrayals can be downloaded all over the Internet. 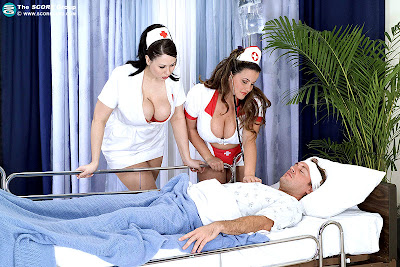 And as others have pointed out or document regularly, pornography is now a part of our general culture. So, as you would expect, the current image of the Sexy Nurse in white (with red trim) uniform has become ubiquitous. As with the WWI artists creating the image of the nurse uniform that became a reality in following decades, life again imitates art, and imagery like that above can be seen in public. Celebrities are into it. 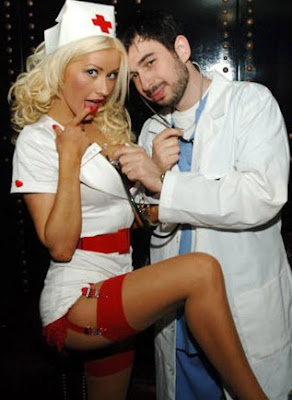 And if you want to dress up for Halloween, the Sexy Nurse is one of your best options, even at the last minute. In fact, if you do a Google search for nurse Halloween costumes, just see what you get. 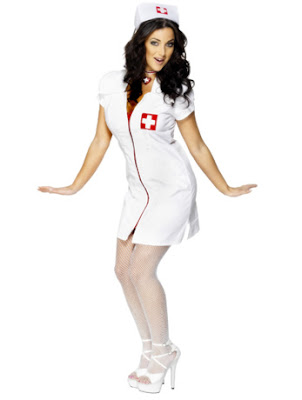 So here's a summary of my story about the white nurses uniform and the imagery of the Sexy Nurse.

So, to bring it back around to Louis Vuitton now, I think it is most likely that, although Vuitton's mankiller bags were modeled in nursing uniforms more similar to the real uniforms of the 1940s-1970s than to the fantasy uniforms of current pr0n, it is pornography that is responsible for the continuation of the public association of nursing with the white uniform.
posted by Chris on Friday, March 18, 2011
Newer Post Older Post Home