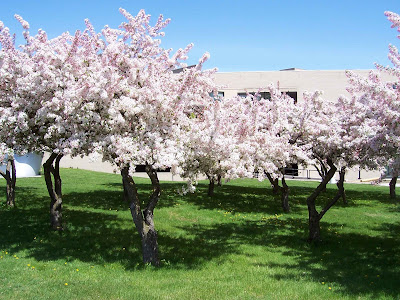 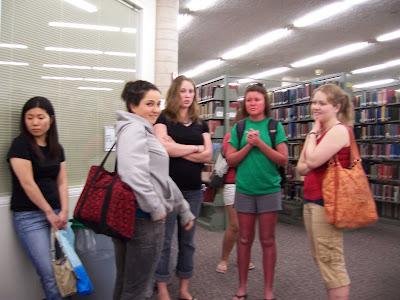 Here are fellow BSN students waiting to take a HESI exam. We have quite a variety here, including the foreign student, the panicking students, and the med school candidate.
posted by Chris on Thursday, May 15, 2008 No comments:

http://publishing2.com/2007/04/12/watershed-moments-in-the-publishing-industrys-radical-transformation/
posted by Chris on Wednesday, May 14, 2008 No comments:

On being a non-traditional student

Sweet. I was going to stay after class yesterday to see what the results of my big maternity exam were in Nur360, but the instructor told me it would take too long for her to grade the exams so she would send me an e-mail when she was done.

So, I waited... and waited... one, two hours... took a nap til dinner time... checked again after coffee and dessert... checked all evening...

I spent the entire evening last night and part of the morning this morning checking my e-mail, until I finally went into her office today about 45 minutes ago.

I got a 93 on the exam (including 3 bonus points from extra-test work). This is not very good compared with my pre-nursing performance, but about par for nursing courses, and quite good for maternity. The instructor said she thought this was the highest grade in the class, which I think was probably a "mistake" to boost my confidence, but it's a nice lie anyhow.

Now we have just have one thing left in Nur360--an Elsevier HESI exam. It'll be a doosy, but as long as I don't bomb it completely, I'll be good.

I'm relieved. I ended enjoying maternity nursing a lot more than I thought I would, but I certainly don't want to repeat it, especially not when that means adding onto an already full course load for next semester...

I got some sort of bug while doing clinical rotation in the nursery. It's a baby bug. They are cute. From Isabella Rossellini's strange "bug pr0n" videos on the Sundance Channel come these two cute pictures of a "baby bee." Go to Green Pr0no and click on Bee. N(quite)SFW... 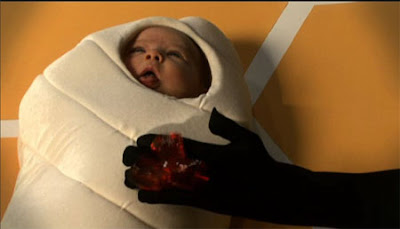 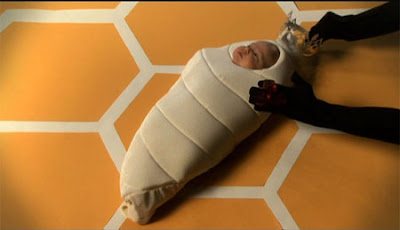 I haven't signed into my YouTube account in a while, so I did so this evening only to discover that the little video I made on how to do a fingerstick has had over 2,500 views. Wow! Now you can watch it here, too...

My big maternity test is today at 13:00. Do poorly on this one and it's another semester next year of placentas, FHRs, and Pitocin! I'm quite nervous...
posted by Chris on Wednesday, May 07, 2008 No comments:

Speaking of instructors on which I have had a crush...
posted by Chris on Wednesday, May 07, 2008 No comments: 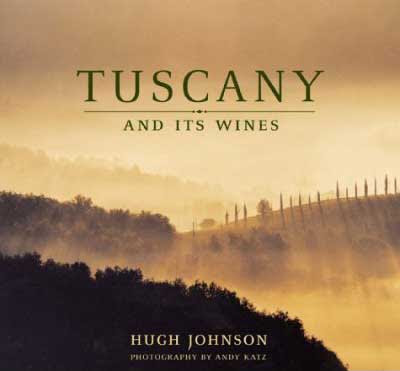 Gave this book to one of my nursing instructors for Christmas. I think I have a crush on her.
posted by Chris on Tuesday, May 06, 2008 No comments:

I'm working on Chapter 13 of Elsevier's Maternity & Women's Health Virtual Clinical Excursion, and I notice that patient Maggie Gardner blames her 5 fetal and newborn deaths on punishment from God but that they are "really" due to Lupus. This is so stereotypical of the presentation of religious people. The religious person can't be the one who is doing well and simply thanks God for all her good fortune--no, she has to be the one who is emotionally beating her self up over a "medical condition" that has nothing to do with God. (Moreover, she is really seething with anger and resentment over a jealous relationship with her sister...)

You can tell the VCE wasn't written by a religious person because the spiritual assessments by the pastor are all about "feeling closer" to God, which is probably the way secular people imagine religious faith to be--all about feelings of closeness. If this scenario was written by an Evangelical Christian like Maggie seems to be presented as, the pastoral assessment would refer to trust and "giving things up."

This is a personal story actually. I thought of it because we were discussing musculoskeletal disorders in Nur363 today.

A couple weeks ago, my 98-year-old grandmother's 94-year-old (ex?-)boyfriend was trying to cut a limb off one of his trees with a chainsaw when he fell off the ladder he was on to the ground 20 feet below. Yes, you read all of that correctly!! The amazing part is, he landed squarely on his false hip and was completely uninjured. The doctor said if hadn't had the false hip, he would have been injured and possibly shattered his entire pelvis.

A few days ago, he walked away from a head-on collision with a drunk driver.
posted by Chris on Monday, May 05, 2008 No comments:

no response from Response Team

Previously, I wrote that I was writing to our great nation's National Nurse Response Team (NNRT) to get information about joining up. So far, no response aside from the automated e-mail. You would think they would be interested in a young(ish) single guy who's also an EMT--almost custom designed you might think...
posted by Chris on Monday, May 05, 2008 3 comments:

After donning the green scrubs around 0645, it was off to a new post-partum family. There's not much to say about what happened. The infant of my patient kept skirting the bottom end of acceptable temperatures, which made me nervous. As well, there's virtually nothing to do in a post-partum rotation compared to med-surg, so I spent much of the day standing around, which made me extremely stressed out as I kept thinking I was forgetting something. One of the maternity nurses was commenting on how busy it was for them--so busy she had to give 10 meds that day!!!

Theoretically, this should be my last day of maternity rotation. I still have to do well enough on the maternity test next Wednesday to maintain a 73 test point average. That sounds like nothing, especially since I was carrying a 4.0 in pre-nursing courses, but for some reason this maternity stuff won't stay down. Whenever people talk to me about it, it's as though they're speaking like the adults in Charlie Brown cartoons. Although I discovered in this rotation that I love those cute delicate newborn babies, it's definitely not worth it to take this class over. Oh, yes, I really hope I pass. Really!!
posted by Chris on Friday, May 02, 2008 No comments:

This is interesting: I don't know how this journal got a .edu domain, but... www.nel.edu
posted by Chris on Friday, May 02, 2008 No comments:

Pretty sure this should be filed under men in nursing as well...

mobitz57
BSN, CCRN, CEN, EMT-B. Critical care nursing, along with volunteer fire and rescue. Going to grad school to get an MSN to be a Family Nurse Practitioner. Now a nursing instructor, teaching pharmacology and critical-care nursing.

Want to know the difference between a cardiac nurse and a cardiac surgeon? Just visit DJ in the UK: 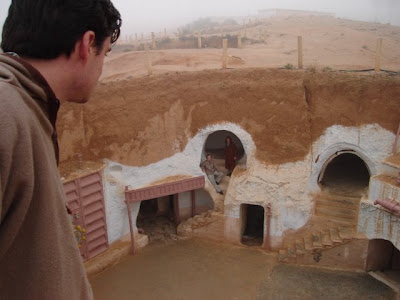 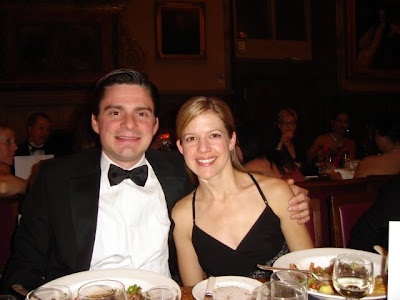 Did you ask if I was bitter? Yes, I am. It's not that I think surgeons and nurses should be living the same lifestyle, it's that if I chosen to stay in biology instead of going into nursing, I think I would have maintained my 4.0 and maybe had a shot at med school, or at least a better shot a PA program. Oh well.
posted by Chris on Thursday, May 01, 2008 1 comment:

Eggology appears to be a product that is simply egg whites in a can. I'm not sure what the benefit of this over Egg Beaters is supposed to be, and I don't see how this could be more cost effective than simply dividing out the yokes. Anyhow, the research on eggs is back and forth. My gut feeling is that they're going to decide that cholesterol levels are mostly dependent on genetics, with secondary influences from dietary fat and life-style stress. I'd just stick with eggs, myself.
posted by Chris on Thursday, May 01, 2008 2 comments:

Path to Sexy blog points us to the website of Tim Ferriss, author of The 4-Hour Work Week. I haven't read the book, and I don't like these types of books as a rule, but I like the article Path to Sexy read. Ferriss has almost exactly the same outlook on diet that I do. Really. When people ask me about food, this is what I recommend, although I almost never having control of meal planning at home or at work... (but wait til I graduate!!):

Plus, he has a photo of Boba Fett in his Flickr stream, so how bad could he be?... 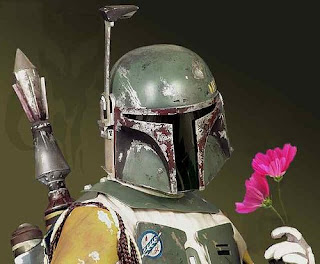 amazing photo of corpse in Iraq

I don't normally go looking for pictures of death or photos from Iraq. Although I think anatomical imagery is fascinating, I don't care for pain and mayhem. However, I came across the blog of GI Kate by accident and found a pretty incredible photo. Not for the faint of heart... 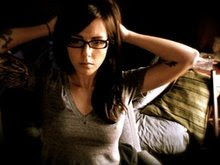 Trying to lose weight. She started high school with a BMI of 25 (just barely not quite normal weight) and now has a BMI of 38. She's doing Weight Watchers. Of course, any plan that controls intake can help lose weight, but I am skeptical of Weight Watchers. I would hate to live my life on a points system, and it seems like the main component is the meetings, anyhow. Well, anyhow, good luck.
posted by Chris on Thursday, May 01, 2008 No comments:

Arrived early and changed into the green scrubs, then picked up my post-partum patient. Unfortunately, I have nothing to say. It was a completely uneventful day and perfect, boring patient who I can't say anything about because it would surely identify her in our community.

I was hoping to spend some time in the nursery holding and feeding newborns, but no such luck.

At the end of the day, one of our resident lactation consultants showed us part of a video by Christina Smillie, MD, about her breastfeeding method, which is to wait for the infant to move into position and root around for the nipple on its own. I'm not entirely sure what the point of this method is except that it's "more natural." The video has almost no explanation on it, just shots of babies latching on by themselves. Lots of breasts. In particular, there is one quite attractive women with really luxurious, large-nippled breasts who throws her head back and laughs when her baby latches. They play that snippet over and over (you know what I'm talking about if you've seen the video). I'm sorry, but in this whole reproductive milieu I just have an extremely hard time de-sexualizing the women. My experience of the "patients" in maternity is quite different from the female patients who are in for surgery, illness, etc. Oh well, no interest in working in maternity, so no ethical conflict.

We also saw a video on odd Mexican birthing assistive techniques using a large scarf. I don't remember what it's called, and I'm not interested enough to search around the web for it. A short search already turned up the website of a doula who insists on classifying herself as a pro-choice, lesbian, latina, progressive gender non-conformist. Gaggk! These are the types militant feminists I was expecting to find swarming around the maternity ward. Actually, it hasn't been that bad, but then you never know what the nurses are thinking about those nasty fathers...
posted by Chris on Thursday, May 01, 2008 No comments:
Newer Posts Older Posts Home
Subscribe to: Posts (Atom)