The fallout from the Japanese tsunami continues. My mother informed me today that health care workers had abandoned their patients in a nursing home, and 14 elderly Japanese had died. Her tone suggested that somehow I bore some responsibility for the deaths. Of course I don't. Do the Japanese even? 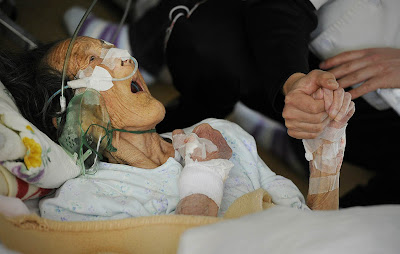 There's no doubt that the tsunami is causing problems for patients and elderly people. Lack of power and supplies in the middle of winter puts patients at risk of death from hypothermia, starvation, and other causes. Unfortunately, supplies are something health care workers cannot create out of thin air. In the context of possible radiation poisoning, what are hospital and nursing home workers accomplishing by staying in harm's way?

In emergency services, it is well understood that protection of the EMTs is a prerequisite for care. Failure to put on gloves will fail you in an EMT practical exam, as will failing to secure a scene and wait for police intervention when appropriate. The rationale is clear and understandable: for a HCW to put himself in harm's way potentially creates more patients while simultaneously removing the only possibility for assistance. Similar logic would guide doctors and nurses in an emergency. In winter, without power, does it make sense for HCW to risk hypothermia when they can't actually provide heat and food to the patients anyhow? No. And when there is a radiation leak, should HCW stay at the patient bedside when they can't provide care anyhow?

The story of the 128 elderly patients found and the 14 deaths seems to have originated with irresponsible Japan-based journalist Ben Doherty. His report, which was picked up by mutliple media outlets like the Sydney Morning Herald and Slate e-zine, says that Japanese military forces found abandoned patients, as though the hospital staff had slunk off in secret without telling anyone.

As actual Japanese journalists of the Mainichi Daily News report, the military was scheduled to meet the caregivers of the 128 patients but never showed up. They then left to seek shelter from the radiation. They planned to go back, but the government ordered everyone to stay inside. In the US, this would seem like an excuse, but as Doherty himself reports, Japanese have died in collapsing buildings because they were told to stay put, such is the propensity to follow orders in Japan. 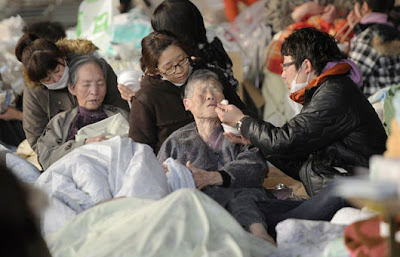 In more positive news, over 100 elderly home residents were saved when a home in Yokohama sent buses to pick them up.

Arthur Caplan, a bioethicist, addresses the question of what to do about patients during an emergency by comparing the tsunami to Hurricane Katrina. Apparently, a number of patients who were found dead around New Orleans had massive amounts of morphine and Versed in their systems, raising the question of how to leave patients.

The Derb on the plume

The other major health story to come out of the tsunami so far is the radiation plume from the Fukushima nuclear plants that is traveling toward the west coast and California. Blogger Skepchick has a series on the power plant composed of interviews with her father, a nuclear engineer. I haven't actually read the story, but she has a cool retro photo of her with her father, so I'm taking the opportunity to post it: 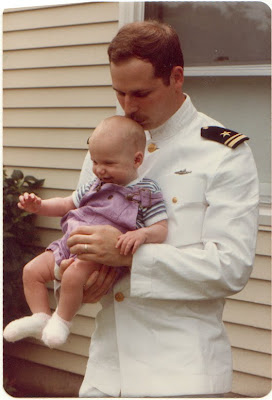 Whatever the nuclear engineer has to say, infamous political commentator John Derbyshire gives us a healthy dose of reality on this week's RadioDerb. Here's a selection from the transcript:

I guess it's not surprising that reaction to Japan's nuclear plant crisis has been hysterical. Tokyo will have to be evacuated! A great plume of radioactive dust is crossing the Pacific! Flee! Flee! Take to the hills! America's stock of iodine pills has sold out. Makers of hazmat suits are doing brisk business. Is this the end of the world? No, but a lot of people think they can see it from here.

For crying out loud. The worst case scenario anyone has so far been able to come up with from Fukushima is that there will be a melt-down at one or more of the reactors, destroying the containment vessel. That, remember, is the total worst case, which can likely be averted.

What happens then? Well, a plume of radioactive steam and smoke goes up around 1500 feet into the air for the few hours, at worst days, it takes to control the fire. Is that bad? It's way bad, but only for the immediate neighborhood — max twenty miles in whichever direction the wind's blowing. You wouldn't want to be eating any lettuce grown under that 20 mile plume. Tokyo? Ah, that's 150 miles away. Los Angeles? Five and a half thousand.

Even that may be overstating things. At Chernobyl, a far worse situation, the fire burned not for hours but for months. The debris went not 1500 feet into the air, but thirty thousand feet. Even so, there is no evidence that anyone more than twenty miles away came to any harm, other than by eating contaminated food, which was a dumb thing to do.

Here's a pop quiz: What was the death toll from Chernobyl — a far worse disaster than anything we can expect at Fukushima, remember? Well, 31 died when the thing blew. A hundred and thirty-four people got injurious doses of radiation, and some of those people have died in the quarter-century since, though many from causes not related to radiation. Wikipedia lists 60 known deaths from the explosion and radiation overdoses. However, UNSCEAR — that's the United Nations Scientific Committee of the Effects of Atomic Radiation — gives the number as 57. Estimates of the number who may eventually die from cancers triggered by lower radiation doses are all over the place. UNSCEAR claimed four thousand cases of thyroid cancer up to 2002, but this number is widely disputed, and thyroid cancer is anyway preventable with iodine supplements. Even if you get thyroid cancer it's highly treatable, with 5-year survival rates 85 percent for females and 74 percent for males. And again, the peril there was from contaminated food and water, which people ought to have been prevented from ingesting.

So if you're having nightmares about Los Anglenos glowing in the dark, forget it. The last estimate I've seen for deaths from the earthquake and tsunami was nudging 15,000, and that will probably go higher. Chernobyl, a far worse disaster than Fukushima, most likely killed less than five percent of that number, perhaps less than two percent. Japan has suffered a terrible catastrophe, but Fukushima is merely a footnote. So please, calm down and stop screaming. Last year 269 people were killed in traffic accidents on the streets of New York City. It's unlikely in the extreme that Fukushima will kill that many Japanese. It's an order of magnitude more unlikely that it will cause even a single American to lose a day off work. Calm down for goodness' sake.