Last night, I may have solved my beer issue, which I like to call "beer face" or "beer head," i.e., flushing, swelling, muscous production, and congestion after drinking beer. (This lasts longer than the drunkenness and takes effect at beer doses below those required for me to get a "buzz.")

As John Durant at Hunter-Gatherer has noted in Beer and inflammation, some people react to beer drinking with less than desirable outcomes. Unlike Mr. Durant, I never drank beer in college because it used to give me intestinal cramping and diarrhea. I never connected this with wheat because I was eating a lot of bread, pizza, etc at the same time.

Then the family went on the Atkins Diet, and I basically haven't eaten bread since. Maybe once a week now, I will eat pizza or a breakfast item such as a "Dutch boy", but this is the extent of my bread intake. 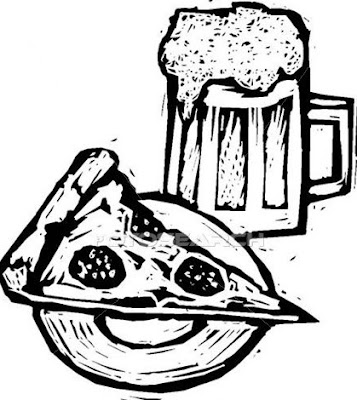 When I do eat pizza, I like to have a beer with it because I don't drink Coke. Since doing Atkins years ago, I have not had so much of the cramping/gas with beer, but I have been experiencing the "beer face" described above.

So, last night we had pizza and beer, and I treated "beer face" prophylactically with over-the-counter medications. My OTC meds worked to prevent the flushing and congestion I get with beer nowadays. I have done this before as well, so I now have 3 successful outcomes, although only at an n=1 size.

The medications I used were
This group constitutes two Non-Steroidal AntiInflammatory Drugs (NSAIDs), one antihistamine, and one sympathomimetic. Although Sudafed is often called an antihistamine in common parlance, it is not one and is more or less an upper like amphetamine. Sudafed works by constricting the blood vessels in your nasal passages, not by blocking H1 receptors, like Claritin.

Using this combo of OTC meds keeps my sinuses clear all night after a dinner with 1-2 beers.
posted by Chris on Saturday, March 26, 2011
Newer Post Older Post Home