Sinners in white: romance and sleaze of the sexy nurse

As far as I can tell, the Sexy Nurse trope that we are familiar with today through Halloween costumes, advertisements, pornography, TV commercials, and other forms of media is primarily a product of some nursing-specific genres of literature and media popular in the mid- and late-20th century.

Through the ages, the non-technical literature that exists on the professional margins but in the sociological center of nursing has been somewhat reflective of its age. So, for example, from the First World War period, we have literature of the "reports from the front" style, and from the Second World War, literature of the "our experience at the hands of the enemy" style. Later in the 20th century, as women became more independent and sexual mores and laws more lenient in general, new modes of nursing literature arose as well as erotica. 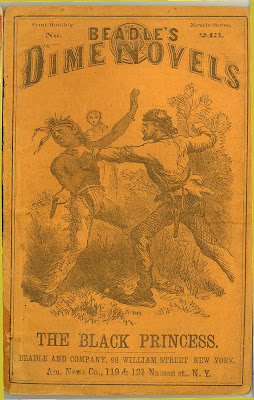 True dime novels of the early 20th century were very thin periodically-published story collections. These eventually were replaced by magazines. However, dime novels also spawned a genre of publication called "thick books," which were small (~4x7) and thin (150-200 pages) novellas and short-story collections that most people would probably call "pulp fiction" today. Romance novels arose in the pre-WWII period, but hit their swing in the 1970s as the mass-market paperback gained in popularity. Between the dime novels and the rise of what we think of today as paperback novels, there existed cheap genre paperbacks, relatively small paperback books, descended from the "thick books," that focused on similar themes and plot devices. 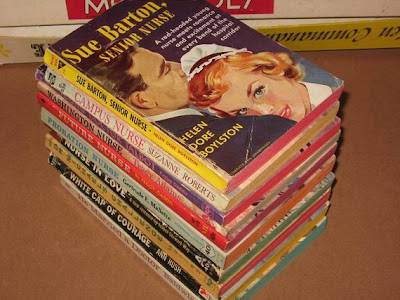 Nursing was one of the genres popular in these paperback formats that existed before the modern mass-market paperback novel. As the photo above shows, these were small, thin, and cheaply produced books. The writing tended to be inconsistent in quality, and authors churned out titles quickly for mass-consumption.

When I say there was a nursing genre, I am referring to the fact that these books used nurses as main characters and were set in hospitals and other health care settings. They were not in any way "nursing books," in the sense of being written by or for nurses about the nursing profession. They were fantasies.

As the genre would suggest, these books were aimed mostly at women and, as such for the time, often addressed romantic themes. They are popularly known as "nursing romance novels" and are easily identifiable by their illustrated cover art. Often sentimentally (or ironically) enticing and casually proficient, the covers are collectable today as vintage art work. See for example the following painting done for a book cover: 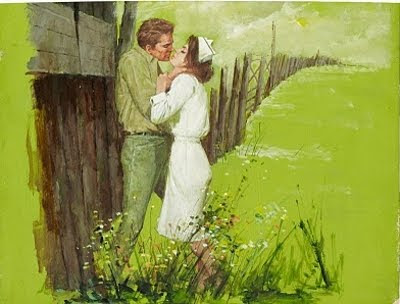 Nurse romance novels were popular in the 1960s and 1970s. They began to die with the introduction of the modern mass-market paperback romance in the 1970s. I have no idea when the first books in this genre were published, although at least one dates to the 1910's. (Also, I note that Ernest Hemingway's famous novel A Farewell to Arms, which was published in the 1930s, bears some superficial resemblance to nurse romance novels, containing as it does a nurse romance.)

The themes of these romance novels seem, to a modern, highly reflective of two things: (1) some stereotypes of nursing that have been identified in modern times; and (2) broad social changes reflected in contemporary women's views of nursing. From Wikipedia's list of stereotypes, we find the following in nurse romance novels:In nurse romance novels, these stereotypes interact with each other, their salience to the reader, and their limitations as explanations of personality to create the emotional conflict out of which the novels' plots and themes were born. These conflicts and the lurid emotional attraction of these novels in turn reflect the social changes taking place during the period of the novels' greatest popularity. Specifically, they reflect changing attitudes toward what constitute legititmate interests in women for independence, erotic fulfillment, and the satsifaction of labor.

The theme often presented is the conflict between role fulfillment as dictated by stereotype and other realities with which the protagonist must contend. In Night Nurse, which has the cover blurb "compassion for her patients threatened to destroy her career," a nurse is caught between trying to comfort her patient (the Angel stereotype) and the reality that other people expect her to be dispassionate in her duties (the Matron stereotype). 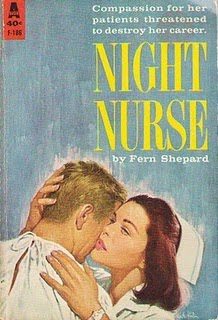 In Surgeon's Nurse--"Jill painfully discovered where a nurse’s highest loyalty lay, and what were the true needs of her own beleaguered heart"--we have a metaphor of sorts involving the Handmaiden and Matron stereotypes as Jill is tempted to leave her surgeon-boyfriend to follow her own romantic self-interests. 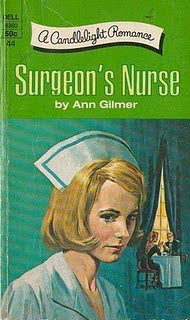 In Office Nurse--"they thought their affair was a secret"--we meet a nurse who is a breadwinner for her home but it turns out she is also something of a hussy as she has an affair with her married doctor boss. 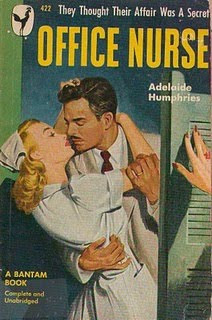 And in Once a Nurse--"...but always a woman"--the protagonist has moved to the big city in an attempt to start a new and independent life. This novel actually supposes a nurse-patient relationship in which the nurse becomes intimately attracted to the patient, once again demonstrating that this idea was in the air even though the protagonist is not really a Sexy Nurse. 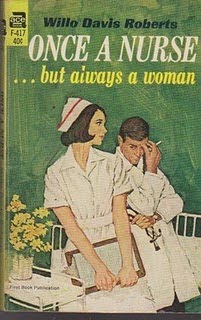 Anyone who checks out the full list of stereotypes at Wikipedia will notice that, in addition to ones that obviously don't apply, like the Gay Male Nurse, I have left out two that might be thought to apply--the Battleaxe and the Nymphomaniac. For the most part, these don't seem descriptive of the themes and content of the nurse romance novel. Despite being stereotypes, the Angel, Handmaiden, and Matron are in their own ways positive stereotypes that a female reader of a certain epoch might accept. The Battleaxe is not. Would you want to read a romance novel where the protagonist was a sadistic bitch?

The Nymphomaniac is also not a positive stereotype, although I should say that it's also not, I believe, a true stereotype. Despite the fact that a nurse romance novel could be racy and contain dialogue such as "You make me sound so innocent. You know that a girl who goes through nursing school learns about life fast" (from Nurse Cooper's Dilemma), it does not make the nurse into a sex addict. I cannot believe that people--who all have contact with real nurses at various phases of life--really can believe the typical nurse is a sex addict the way they can that the typical nurse an altruistic Angel. That is, unless you define nympho as any woman who would pursues an erotic coupling rather than purely chaste courtships. In which case, there probably are lots of nympho nurses! No, for putting the nympho in nympho nurse, we need to look at another genre of literature.

In addition to the nurse romance novel, another genre typical of the 1960s and 1970s is what I will call "nurse sleaze," another category of small, thin, cheap books. Nurse sleaze books were a category of erotica that, unlike nurse romance novels, were (I think) marketed at men. Rather than focusing on conflicts of work, and of love, and between work and love, and between the expectations made of nurses and their desires, nurse sleaze books focused almost exclusively on sexuality, sometimes quite graphic, sometimes more softcore.

Without going into the history of pornography and censorship, suffice it to say that the 1960s, '70s, and '80s saw a dismantling of many of the laws forbidding the sale of works that described and depicted sex acts. Starting with the Scandinavian countries, the trend swept through Europe and the United States. Sweden even legalized child pornography for a short time! 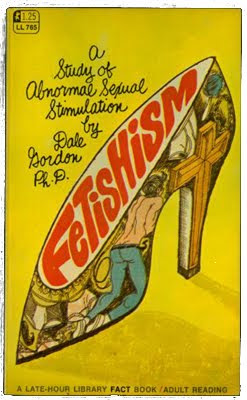 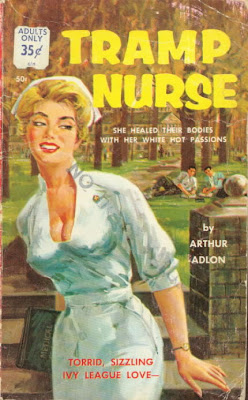 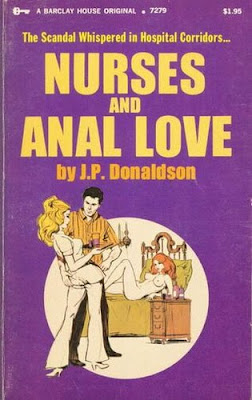 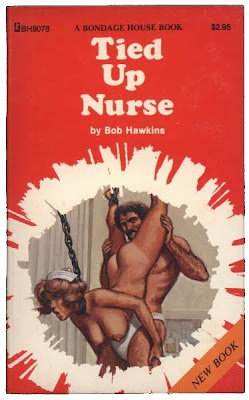 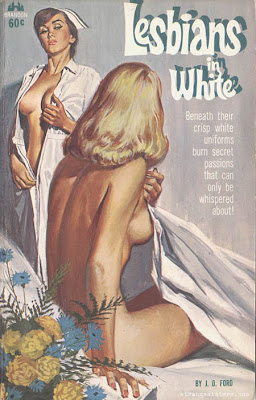 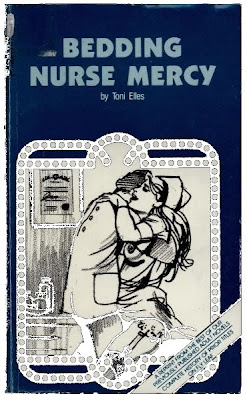 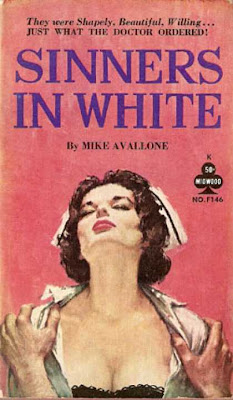 Is there any relationship between these books of nurse romance and nurse sleaze? I think there is. Both are focused not on nurses as health care professionals but on nurses as the locus of emotive-erotic fantasy. Admittedly, there are qualitative differences between the prurient interests of Nurses and Anal Love and a novel like Jane Arden, Space Nurse. But as they relate to the Sexy Nurse trope, both are contributory. Sleaze reflects and contributes to the ongoing role of the nurse as a focus of male sexual fantasy, but nurse romance has a stronger role in promoting the stereotypes on which those fantasies rely for their caricatures of nurses' relationships to patients and doctors. In a sense, both are "sinners in white," both suggesting a conflict between the lived experience of nurses observable to the public through interactions with real women and the lived experience of inner motivations and narratives of nurses made accessible through fictionalized narrative.