Vanishing Tungus: The Story of a Remarkable Reindeer People is a juvenile book for very mature juveniles. If you can imagine, it is a sort of enthology of Siberian reindeer herders aimed at the grade school set, with chapters on family, weddings, shamanism, clan organization, art... 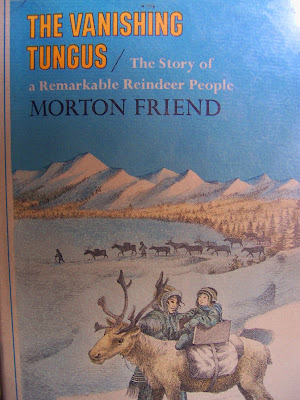 The author is a rather dull sounding man of the typical 1970s mold who was working on a book on Zen and Martin Buber when he died. But Vanishing Tungus is filled with rather interesting information presented in a very accessible format.

Apparently, the Tungus were pipe smokers, which seems very plausible:

"...as soon as the Tungus caught enough fish for his own needs, he headed to shore. Depositing the fish with his wife, he lay back, smoking his pipe and conversing quietly with his clansmen. The industrious Chinese were dumbfounded... He killed no more than he could eat." Reminds me of Mr. Beaver...

"She offerred him her pipe; he filled it with tobacco, passed it back to her, then filled his own. After they had both lighted their pipes with an ember from the fire, they sat back, puffing contentedly."


Here are some selections from the bibliography that I thought sounded interesting:

I wouldn't pay a lot of money for this book, but if you find it for cheap, it's worth a quick read.
posted by Chris on Monday, March 05, 2012
Newer Post Older Post Home