Mongolian cooking is simple. Pretty much everything you need to know can be gleaned from the few websites that are out there. But if you go to Amazon, you'll find a couple cookbooks as well. Are these worth the effort? 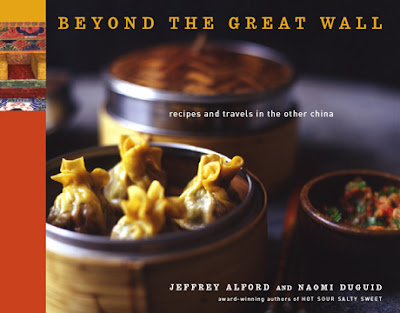 First is this book called Beyond the Great Wall: Recipes and Travels in the Other China. If you're fixated on Mongolia, you're probably thinking like I was of Mongolia--the other side of the Great Wall. But actually this is a collection of recipes from the Chinese periphery, including Tibet, Khazakhs, etc. The recipes aren't necessarily inauthentic, but they aren't necessarily interesting, either. The book has a lot of travel and cultural information, and it is a very large and imposing book, making it a great coffee table book or lounge chair travel guide. But Mongolian food? Not so much. There's a "Tuvan" recipe that the authors admit may not be Tuvan. 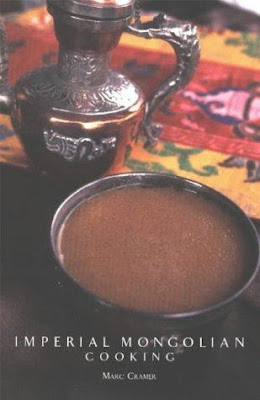 The other Mongolian cookbook available from Amazon is called Imperial Mongolian Cooking. This sounds impressive, and the cover of the book evokes rich tent life. I imagined that the author had scoured the pages of manuscripts from the period when the Mongol khans sat on the jade throne in Peking. Those northern barbarians discovered the riches of their empire and had their cooks distill it into a special cuisine available only to the emperor and his household, right? Wrong! The theme of this book is "recipes from places that used to be in the Mongol empire." Since the Mongols took over pretty much all of Eurasia, this cookbook is pretty much just a pan-Asian cookbook. And the recipes aren't anything special, either. Definitely don't waste your money. If you show it to Mongolians, they won't be impressed. 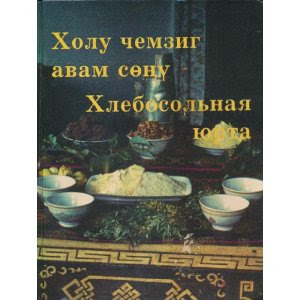 Finally, there is this listing in Amazon called "Tuvan cookbook". It fascinates me, but as it's $40 I haven't bought it yet. The layout on the cover looks awfully fancy, so I assume this book is about the dishes you'd find in Kzyzl, not in the Mongolian taiga, but you can always fantasize, right? If my Cyrillic is improving, a transliteration of the cover is "Kholu Chyumeig Avam Sonu Khlebosolnaya Yorta". I have no idea what this means, but I don't think it's Mongolian. I think maybe it's Russian, or Tuvan.

As I mentioned at the start of the post, Mongolian food is simple, and you can learn all about it online. If you like lamb, beef, noodle, yogurt, cheese, milk, and booze, you've got it covered for the most part.
posted by Chris on Saturday, March 03, 2012
Newer Post Older Post Home