Lords of the Animals The Tsaatan Reindeer Riders review

The Tsaatan, The Reindeer Riders is a short film by Jacques Malaterre, who also made A Species Odyssey and Ao the Last Neanderthal. 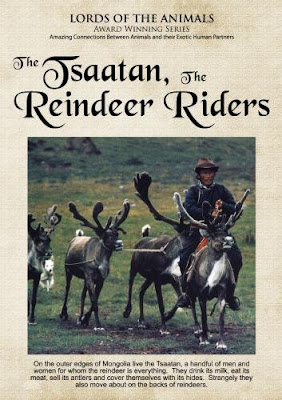 The 28-minute film covers about a day or three in the life of a single Tsaatan herder named Bat. We see him herding, hunting, cutting reindeer antlers, selling antlers to a Mongolian trader in the valley, carving, and a variety of other activities. A lot of the Mongolian Taiga is shown as well as a fair amount of reindeer.

This film looks like it was made quite a while ago. The Tsaatan did used to cut antlers as this film shows, although they have stopped doing that in order to maintain the health of the reindeer herds. Instead of cutting and selling the antlers to the Chinese as the film shows, they now collect the antlers after they've fallen off naturally, carve them, and sell the carvings to tourists. This was made possible with the help of the organization Totem Peoples.

This is a great little film and actually much more informative and intimate than the flashier productions by Hamid Sardar. Amazon has a video on demand version of this film, too, but I've never been able to get Amazon's system to work correctly.
posted by Chris on Sunday, March 04, 2012
Newer Post Older Post Home