Looking for The Book on reindeer herding culture, past and present? I was, and I thought it would be Piers Vitebsky's The Reindeer People, which has a very romantic cover. Unfortunately, it wasn't quite what I was looking for, and perhaps that book can't be written anymore. 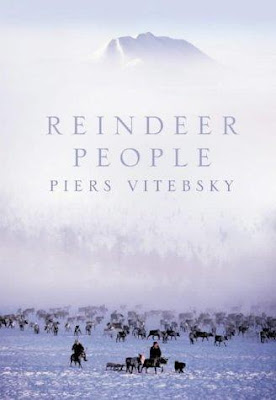 I'm not quite sure what to make of this book. It's part ethnology, part travelogue, part political journalism, and part memoir, recounting as it does scholar Vitebsky's various trips to study reindeer herding peoples in the former Soviet Union and the relationships he made there. The book contains descriptions of the herders' culture and lifestyle as well as recounting the author's impressions and reflections of his time there and the changing social and political circumstances of the people as they transitioned into the post-Soviet future.

Who is this book supposed to appeal to? It's so idiosyncratic that it feels as though it were written to be esoteric, as though its labyrinthine storylines were meant to protect the reindeer peoples' identities from all but the truly devoted reader. Where does the inspiration for a book like this come from? Vitebsky was originally a student of Classics and then ended up in India before Siberia. Is this history-memoir written on a model from antiquity or from the colonial period? Who knows.

What I was really hoping for was a book that tied the current peoples' lifestyles to any existing evidence of the archaic origins of reindeer cultures found in the archaeological record. This type of writing is more or less tied to the books' first chapter, which was fine, and could have been spun into an entire work in itself and held my interest. It's possible that there simply isn't enough information available in today's world to write this sort of book. Maybe The Vanishing Tungus is as good as it gets?

It sounds as though I'm knocking the book, but I'm not. It's not a bad book, just not what I was hoping for, and it's not without usefulness to me, either. Recommended? Meh, sure.


Khanty of the Taiga

I also picked up Khanty: People of the Taiga, but it appears to be a book very much like Vitebsky's, on the same scholarly memoir model with a lot of current politically-oriented journalistic content. So instead of reading it, I simply skimmed some sections that had information I was interested in.

I have to say that the bibliography for this book does look interesting. Like Vanishing Tungus, it has some older books on the reindeer peoples that I hadn't found in Amazon or in my university "card catalogue" searches. Worth a look if you're into this topic.
posted by Chris on Monday, March 26, 2012
Newer Post Older Post Home