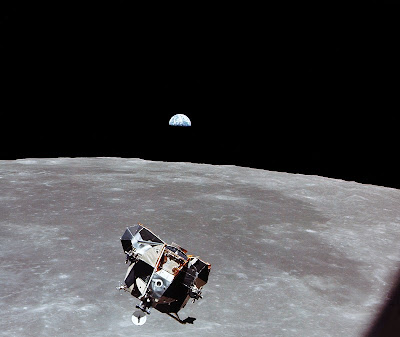 Without context, if you asked me to name the films that had the most influence on me as a boy, I would never now think of The Right Stuff. But in fact, when I was younger, I nutured two perspectives. On one shoulder sat the daemon of an accomplished pilot I knew from our local AFB, encouraging an interest in sci fi/space, the air force, and science. On the other shoulder sat the daemons of my favorite authors, encouraging an interest in fantasy/antiquity, academia, and neo-Ludditism. With age and the closing of our local AFB by congressional commissions (not to mention the end of TNG), the interest in flying ships began to wane. However, performing acts like re-visiting The Right Stuff (now the book rather than the film), can bring back the sense of grandeur one felt. Reflecting on the Apollo mission and the actual act of walking on the moon is another such act.

Perhaps John Derbyshire summed up the space program best in his recent essay Magnificent Folly. Like him, I used to have the idea that man would of necessity find a way off Terra out amongst the stars. Now I'm not sure how NASA's costs can be justified. There is still plenty to be done down here. However, we cannot write the moon landing out of our history, nor would I want to. It remains a monument to human achievement that can serve a number of purposes today, in addition to its inherent awesomeness and interest.