Culture death? there's an app for that

Purely by coincidence, linguist K. David Harrison of When Languages Die, which I reviewed a few days ago, is in The Economist: He's trying to rally social networking to save endangered languages. The BBC also picked up the story and has slightly better coverage, explaining a little of the process. 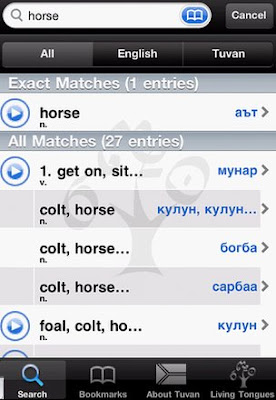 Harrison has helped to build talking dictionaries--that is, compilations of sound files that record the pronunciation of words by native speakers--of several languages, especially Tuvan. The Tuvan dictionary has been incorporated into an Apple iPhone app (see photo above) that helps the user learn Tuvan.

How social networking is involved is a little more wishy-washy in the reporting. It involves Facebook and Twitter and young people, duh! Harrison has his own Twitter, but it's not public. I can't tell if the idea is to let native speakers communicate with more people (i.e., disseminate the language) or what. I know that, with regard to the Mongolian reindeer herders in the Taiga, they don't have access to the Internet except on the rare occasion they go into town.

If you're interested in learning Tuvan, there is a Wiki and a Yahoo group.