I checked out a copy of When Languages Die by linguist K. David Harrison because of his work on the dying languages of Siberian reindeer herders. 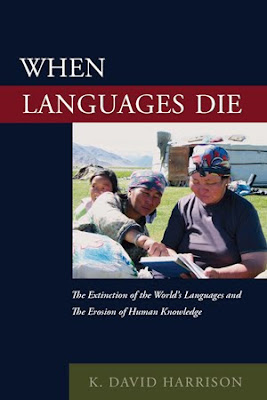 As I mentioned yesterday in discussing the Tungus, while there are a whole range of reindeer herders with different cultures across northern Eurasia, from Finland to eastern Siberia, many of the herders north of Mongolia have cultural and linguistic similarities.

The Tsaatan Dukha reindeer herders speak Mongolian, but their "native" tongue is Tuvan, a relatively rare language of the Turkic language group, which is related to Mongolian. Tuvan is also spoken in the Republic of Tuva, nearby northwest Mongolia. Dialects of Tuvan as well as closely related separate languages are spoken by a variety of herding peoples just to the north of Tuva as well as to the south of Tuva in far western Mongolia.

Harrison's doctoral dissertation and his main focus of work is on Tuvan languages. Photos and fairly clear explanations of the languages he works with can be found in the fieldwork section of his website.

The book provides some rather interesting information about the herding peoples he works with. In an attempt to explain how different languages instantiate different types of cognition, he writes a lot about Tuvans' understanding of time and geography. These anecdotes have inherent interest to anyone trying to learn about the reindeer herders, regardless of their linguistic relevance. The book is not linguistically technical and is an easy and fast read.

Beyond the issue of cultural learning, I have to be a little less enthusiastic. Harrison has written this book as an apology for the study, documentation, and attempted salvation of endangered languages around the world. While I am all for trying to preserve forms of human flourishing and history, I am distressed that Harrison has had to fall back on pragmatic and modern arguments.

Men's natural instincts towards beauty and knowledge are adequate arguments in my mind for Harrison's work. But Harrison wants us to believe that languages are a window onto diverse forms of alternative ways of knowing. This perspective is important to him because it puts his work on par with natural sciences. If western sciences can approach nature only through their own non-universal paradigms, then we have something important and "scientific" to learn by studying other ways of knowing.

Why this perspective is important to Harrison I can't say for sure. But the tone of his book suggests that it is not what really animates him. His writing on the relationship between scientific and indigenous taxonomies is strained, overdone, and tedious. The prose becomes natural and emotional only when he discusses personal discoveries, such as the first written text of the Ös language.

Tolkien, another linguist, in creating the character of Gollum, made him a creature who had an unnatural interest in find the "roots" of mountains deep in the earth. But hobbits and dwarves also dig down in his books for buried splendors. The drive to know the past and to uncover things lost or hidden is a real motivation for many people, one in which Tolkien and Harrison both partake, I think.

That Harrison can't dabble in poetry by baring his own soul a little in defense of his field of inquiry is a statement about the state of the modern academy. Harrison's book is essentially a justification of his life's work based on its "usefulness," a pragmatic argument in line with the culture of productivity, grant writing, and lowest-common-denominator thinking that seems to dominate much of university life as far as I can tell.

The book is especially unfortunate in that the lengths Harrison goes to in showing the cognitive differences and advantages for Tuvans of Tuvan languages ultimately undermine his larger argument.

The Tofans Harrison studies have a preternatural instinct for direction and navigation. Harrison shows that this is related to their language, naming schemes, and ways of communicating. Tofan is "efficient" for knowing the land. But the stress Harrison places on the extent of Tofans' discussions about land and movement show that the cognitive resources demanded to maintain the Tofans' navigational abilities, in terms of time and focus, make the broader Tofan lifestyle extremely inefficient and parochial. The Tofans must work constantly in order to be successful at a very narrow range of skills. In short, the opportunity cost of speaking and being Tofan is the development of science and literature. Although implied, I'm sure this is not the conclusion we are supposed to come to from When Languages Die.

I'm not sure who the target audience is for this book, so I have trouble recommending it or denouncing it. I enjoyed it and sympathize with the author, but remain unconvinced that the importance of language preservation is of a kind with the importance of the human genome project.
posted by Chris on Wednesday, February 22, 2012
Newer Post Older Post Home