Well, seen in the context of Murray's new book, The Great Sort, Bobos in Paradise, etc, we call all see where this article is heading:

It’s not often that two Harvard graduates share an NBA court together. But when Jeremy Lin and the New York Knicks visited the Washington Wizards on Feb. 8, another product of the Ivy League school — the Wizard Girls’ Joanna Zimmerman — was cheering from the sidelines. 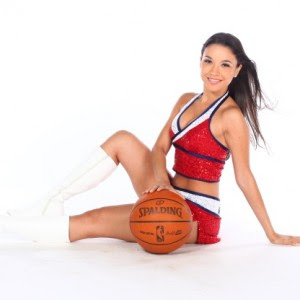 Zimmerman graduated from Harvard in 2010 and first met Lin, whose performances have caught worldwide attention and dazzled NBA fans, on campus. They once lived in the same housing complex, and the two became good friends.

If the current socio-economic situation doesn't change in the US and East Asia over the next 50 years, I expect we're going to start seeing a lot more pro-athlete-geniuses in the news. "So-and-so had an offer from Goldman-Sachs but chose to sign a contract with the LA Lakers instead. " The other piece of this story that goes unmentioned is that Zimmerman looks more like Lin than one would expect a Zimmerman to look.
posted by Chris on Monday, February 27, 2012
Newer Post Older Post Home