Mongolia has mountains, yes. And desserts. And steppe. Wide clear blue skies. The whole lot. But it doesn't really have a specific geography to attract the traveler in its own right. The Himalayas are a very different place that would attract travelers even if they were devoid of native people. Mongolia's real attraction is that people contend with it and live a life more like that of our ancestors than many of us will experience. So in the absence of living there, the best one can do is read a book by someone who has, like Louisa Waugh's Hearing Birds Fly. 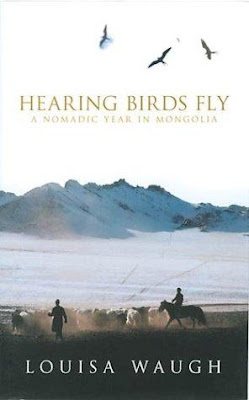 Waugh spent a year in the west of Mongolia teaching English in a small village school. There, she lived in a yurt, rode horses, chopped wood, ate meat, hunted with eagles, braved the cold and ice, survived a bubonic plague outbreak, fended off amorous men, made many friends... She inadvertently chose to live in a place where Kazakhs and Tuvans live together, meaning she was able to experience life with three of Mongolia's major ethnic groups. (The Tuvans, though ethnically related to the people of Tuva and reindeer herders, do not, however, herd reindeer in this part of Mongolia.)

Her story, or adventure, is told very well in 250 pages packed with her detailed and descriptive yet fast-paced prose. Of several books I've read by visitors to Mongolia, this is by far the best written and gives the greatest sense of a place and people. It is, in the end, a travelogue of sorts, and there is no theme, purpose, or argument other than to record life as she lived it, but that is enough.

There is material here to appeal to both those interested in health care and in ancestral life. Everyone in this book lives close to death, and there is sickness and tragedy aplenty. But as she notes the Mongolians live without sentimentality, their lifestyle is also described in a way that makes it seem appropriate and commonplace.

The book is easily recommended, although Mongolia has changed significantly I think in the short time since its publication. Even in the short time between Waugh's departure and the book's publication, her little village received electricity and a new long-term English teacher. No doubt, by today, they have at least one Internet connection.
posted by Chris on Friday, February 24, 2012
Newer Post Older Post Home