It never rains but it pours. After not writing anything on The Sexy Nurse Report for a long time, there's two posts in a row! 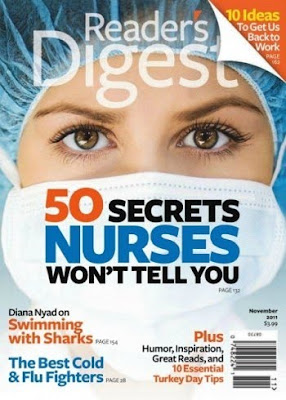 One thing that's important to realize is that the images presented in the hyperlinks above did not appear in the print edition of RD. Previously, I complained about Nurse Jackie, who seems to have become the poster child for nurses in the entertainment industry. Reader's Digest leads their story with an image of Nurse Jackie, and includes on the next three pages Hot Lips Houlihan from M.A.S.H. and Nurse Ratched from One Flew Over the Cuckoo's Nest. A more inappropriate trio of Sexy Nurse imagery could not be found: bubble, bubble, toil and trouble...

But it doesn't end there. The "secrets" are a mixed bag of statements by RNs on a variety of topics such as the "real" scoop on doctors and how to be a good patient. For the most part, they skirt accuracy and appropriateness, but they do it in an unchallenging way. For example, there are a lot of things people could know about being a good patient in the hospital, but not asking out the nurses is a no-brainer.
posted by Chris on Wednesday, February 08, 2012
Newer Post Older Post Home