Nurses and doctors together?

Returning for a second look at Razib's Classicists are smart! (yeah, Classics!) post, we can take a looksee at the health care professions. If you aren't ready to be dismayed, stop reading. 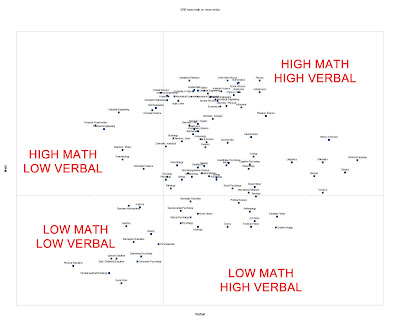 Aside from gym teachers, social workers are about the bottom of the barrel as far as GRE test scores go. Nurses, nutritionists, and counselors are doing a little better, but in terms of the overall spread of grad students, they are below average.

Medicine may be plotted, but I can't find it. I would assume this is because doctors take MCATs, but I believe those pursuing an MMS take GREs, so who knows... Anyhow, as you can see, physiology and pathology are right about in the middle, while biochemistry is between the middle and the outer realm of physicists and engineers. I would guess doctors would average a little lower than biochemistry.

The point of this is about degree creep.

While doctors aren't physicists, they also score well above those pursuing MSNs and PhD in nursing. This is why I wiggle and get uncomfortable when nursing managers and nursing academics complain that they need advanced degrees in order for the medical staff to take nursing seriously. Your average advanced degree nurse is simply not as smart as your average doctor. Doctors know this, and pointing to some letters after a name is not going to change that.


nursing is a diverse field, though

In fact, I would guess that most doctors think advanced degree nurses are just a cut above RNs. That's definitely not true. In my experience, nursing has much more diversity in terms of academic ability within its ranks than other jobs. In any given nursing school, it will not be uncommon to find a student who maybe could have majored in biochem and gone to med school alongside students who are struggling with the basic math needed for dose calculations. If those lower end students make it through to get certified, they aren't going on to grad school, but they are influencing the perception of nursing in the world at large.
posted by Chris on Wednesday, January 25, 2012
Newer Post Older Post Home