I'm a caveman, not a grok

Last year, I had my genetic material tested by 23andMe. Actually, it was pretty boring, uneventful, and uninformative. Guess what... I'm at increased risk for DM2 and heart disease, which I could have figured out by looking at my family tree!

Recently, however, 23andMe added a feature to determine the amount of Neanderthal genes in your mix, which varies from ~1% to ~4%. Razib Khan reported his as ~2.4%. I was pretty sure I was higher than that. Despite eating okay and working out regularly with CrossFit, spinning, and weightlifting, I'm still a pale, hairy, 252 lbs. When I exercise, I seem to be able to add weight and get broader, but never lose weight and get svelt unless I starve myself at the same time. I was hoping this represented an ancestral genetic propensity to add bulk, which you would assume is Neanderthalish from the forensic recreations of those peoples.

It turns out I'm ~2.7%, only the 68th percentile. I'm a little disappointed: apparently, I'm just fat, not representin' a different lineage. On the other hand, I'm taller than average and have seemingly small nasal passages, which tells you... 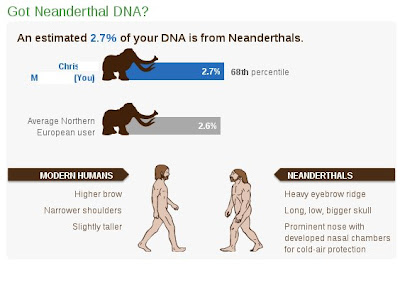 On the other hand, I'm not a grok. I learned recently that "grok" is actually a term invented by a sci-fi great, Robert Heinlein. It essentially means to copy something. That explains why Grok became the early Paleo logo, but also why it became despised by those who wanted to reject Paleo reenactment.

Well, anyhow, happy DNA hunting. If I might suggest--if you have red hair, please marry another red-head. Thanks.
posted by Chris on Tuesday, January 03, 2012
Newer Post Older Post Home