An Ear to the Chest review: flu and stethoscopes

If you work in health care, the chances are really, really good that you own a stethoscope. They are ubiquitous in hospitals (except in limited circumstances, like emergencies when you don't have yours with you) to the extent that when you walk on the unit at the start of shift, you can probably just pick a stethoscope up off a countertop (and of course wipe it down with alcohol before use). Yet I bet less than 1 in 1000 HCPs (health care professionals) could tell you anything about the history of the device. Luckily we have M. Donald Blaufox's An Ear to the Chest... and Wikipedia... 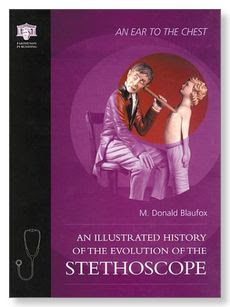 With its dubious cartoon cover and the little logo in the upper left hand corner, you would be forgiven for mistaking this for a DK Eyewitness book. But it's more serious than that. The author is a professor of medicine in NYC and has been collecting auscultation antiques. The book has 12 pages of references for 80 pages of text and photos. And there is a separate 55-page appendix of the doctor's collection with its own set of references.

If you don't have the cash to shell out for this book right now, you can simply head on over to the Wikipedia article on the stethoscope. The book and the article basically agree about the general outline of the stethoscope's development, with Blaufox giving us excruciating details of the failed designs and 19th debates over who invented what first that took place in the letters pages of journals like The Lancet.

It's interesting to note that from the 1920s to the invention of electronics, the only real developments in stethoscope design came in materials. But what's even more interesting is that, prior to the Bowles-Sprague model of the 1920s, there wasn't much development in design going back to the start of the 20th century, the pre-WWI era. Between the 19th century and the 1920s, we had a world war and a massive world-wide outbreak of respiratory illness in the form of the Spanish Flu. Yet, no real developments in the primary instrument at doctors' disposal for assessing the heart and lungs. I don't really have an explanation for this, but I think it is odd.