When I was in early adolescence I woke up in my dream.

I was dreaming of running, of being chased through a floorless and horizonless red-brown haze by some threatening force. Of a sudden, I realized that I was asleep and in a dream. At the same time, I realized that since it was my dream I had complete power over it.

My fear immediately evaporated, and I turned around in my dream and started chasing the force that had been chasing me. I had an intense feeling of exhilaration, of god-like power over my circumstances. Then I woke up into reality, and the dream was over.

For a long time, I thought my "wake-up dream" was a significant and special experience, and I avoided talking about it. But then I overheard a conversation by some other people about their own experiences waking up in dreams.

It turns out, my experience was not special, and its significance is unknown. It even has a name--lucid dreaming, or dreams "in which a person becomes aware that he is dreaming." One of the primary researchers in this phenomenon is Celia Green, co-author of the book Lucid Dreaming: The Paradox of Consciousness During Sleep. 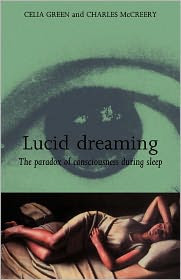 Lucid Dreaming is available as a Google Book, but the section discussing its use as medical therapy is blanked out, so I ordered it through the university's InterLibrary Loan.

The book is fairly interesting, if dated now (it was published in 1994). Although lucid dream states usually result in a perceptually more "real" experience (full-color vs my monochromatic chase sequence), the book seems to confirm that my experience was of lucid dreaming--i.e., it is common for spontaneous lucid dreaming to first manifest itself as a response to nightmares.

The section of this book on using lucid dreaming as a therapeutic treatment is, unfortunately, very thin. It says, essentially, that lucid dreaming therapy is a theoretical possibility but that there isn't any evidence it works or has been tried seriously (outside of a few isolated psychoanalytical psychiatrists). The contention that lucid dreaming could perhaps be used in healing through changing the body's physiological states a la experienced Tibetan Buddhist monks seems too hypothetical to bear much interest. What, are cardiologists going to prescribe lucid dreaming instead of Beta-blockers to control heart rate?

For those interested, the book mentions several techniques that can be used to increase one's chances of experiencing lucid dreaming. I have read in a different scholarly source that lucid dreaming can be trained, so I suspect the matter is worth looking into.

The book touches on a few related phenomena such as false awakening. It is written fairly well, and was a fast read in 'brick & mortar' form.

Part of my interest in lucid dreaming was my initial idea that perhaps somehow it was like the experience of being sedated in the ICU with Propofol or Precedex. In fact, it is clear from this book that the experiences would not be alike.

Lucid dreaming involves a dream, awareness of the dream, and lack of perception. Moderate sedation (RASS~2) involves perception, not a dream-state. Unlike the forgetfulness that accompanies sedation, lucid dreams are often easily remembered in the waking state. Unlike sedation, which decreases motivation and control, lucid dreaming involves mental arousal and full control of the 'body' within the dream context.