Cepacol... now it sucks... thanks to the FDA

Cepacol lozenges used to be a great product. Too bad they suck now. Is the FDA to blame? 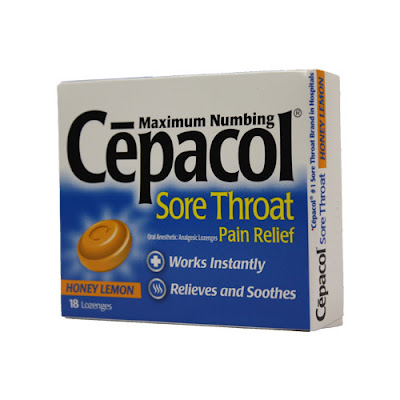 You can't get many really effective medications as an over-the-counter (OTC) formulation. APAP (aka Tylenol) seems to be a good fever reliever, but as a pain reliever, I think it mostly has placebo effect. Same with ASA (aka aspirin), which is effective during heart attacks, but doesn't do much as a pain reliever.

Pseudoephedrine (aka Sudafed) used to be an effective OTC medication, but of course now you have to sign for it, the volume you can buy is restricted, and its replacement--phenylephrine--doesn't work as well.

Like old Sudafed, Cepacol pain relief lozenges were an effective OTC medication, containing 15mg of the sodium-channel blocker benzocaine in each lozenge.

I first discovered Cepacol the winter before last. After starting in the hospital, I came down with an awful case of sinusitis with a sore throat so bad I couldn't sleep for swallowing. I decided to buy simply everything in the store that might work, and Cepacol turned out to be the winner by far for relief.

Although it was difficult to get the numbing agent onto the back of your throat as the lozenge dissolves, it wasn't impossible. You swish spit around the lozenge and then swallow it purposefully so that it slides down in the right place. This method delivered very effective pain relief. After a lozenge, you could count on about 15 minutes of numbness. Combined with a Percocet, Cepacol gave me blissful sleep that winter.

Since that experience, I used Cepacol several times since for sore throats and found it to be an effective cough suppressant as well. I'd even got it ordered for ICU patients who were complaining of sore throats--patients who every other nurse was telling, "well, your throat's going to be sore for several days because of that tube you had down."

So yesterday, I woke up with wicked post-nasal drip and sore throat. I ran out of Cepacol lozenges during the Concert Band of Cobourg performance I mentioned in the last post. So as soon as the concert was over, I went off to the pharmacy, only to discover that Cepacol was being marketed in a new package.

"No matter," I thought, "every graphic designer needs a job."

I should have been highly suspicious, though, at the fact that the new packaging was a larger box with fewer lozenges and a fancy-looking but completely meaningless graphic on the outside. Most telling is the new box's Orwellian declaration that it provides the "same relief." In today's world, that's an almost sure indication that it won't. 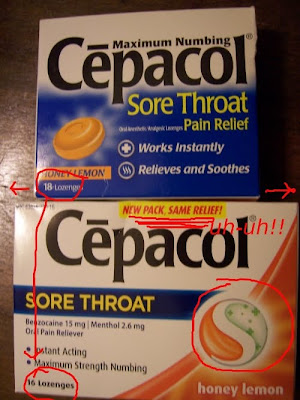 What I didn't count on was that the lozenges were different as well. Different as in slimey textured, sickly sweet tasting, and ineffective for relief. They might as well have been a Halls cough drop.

As I popped the first one in my mouth, expecting that familiar, distinctive, Cepacol flavor, I was greeted instead with a strong taste of artificial sweetener. Using the swallowing technique I described above, I passed this vile nectar over the back of my throat to no avail. No numbness did I feel at all! And after dissolving the whole lozenge, I was left with an unpleasant greasy residue in my mouth as well.

Well, if you take a close look at the ingredients lists, new and old, you can see that they look very similar with some minor differences. 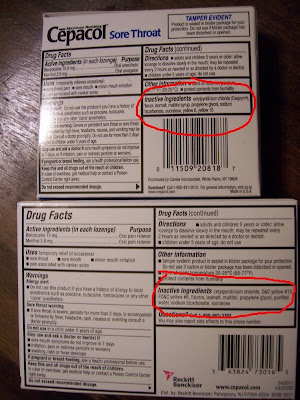 In case you can't read these, old Cepacol contained:
New Cepacol contains:
One thing you have to know about old Cepacol is that its distinctive color and flavor came from Ceepyn. So what does the fact that yellow dyes 10&6 were moved up the ingredients list and water added to the new Cepacol tell us? It tells us that Cepacol's tradition ingredients have been diluted and the coloring dyes increased to cover up this fact. Supposedly, the amount of Benzocaine in both formulas is the same, but I wonder...

By the way, in case you don't think the lozenges are different now, take a look: 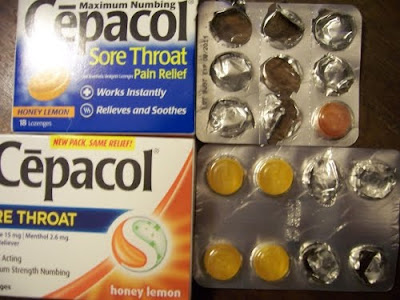 
Did the FDA kill oral relief?

What happened to Cepacol? Well, there are two answers. One is that the distributor changed. Cepacol used to be owned by Combe, Inc, an American company from White Plains, NY. But this year, Combe sold the Cepacol brand to a foreign corporation, namely Reckitt Benckiser.

But the real question is, why did Combe sell Cepacol in the first place?

We know that President Obama's new, more progressive FDA is a heavier regulator, less willing to leave choices up to American consumers. And just this year, the FDA released a warning about benzocaine, claiming that it has been receiving more reports of a rare condition called methemoglobinemia in which hemoglobbin is oxidized, reducing its ability to deliver oxygen to tissues and resulting in a hypoxic state.

In the FDA's report, they claim that they received 21 reports of methemoglobinemia associated with benzocaine numbing agents. However... 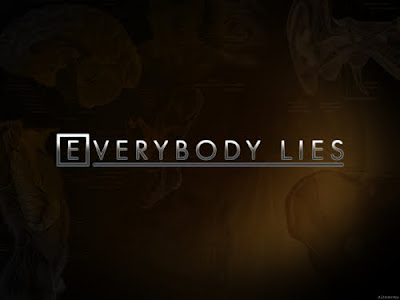 Yes, patients do lie all the time. Let's say you're a dumb mother with a baby crying incessantly from teething. So you slather on way more of the benzocaine teething gel than you're supposed to. Then your baby turns blue, and you take it to the emergency room. The doctor asks, "did you use more of the benzocaine gel than recommended?" What are you going to say? Of course, "oh, no, doctor, I used just the amount it says on the package." The fact that the FDA is not savvy enough to understand this human dynamic points to the fact they are really interested in increasing regulation for its own sake.

The FDA's warning ends with the line "FDA will continue to evaluate this safety issue and will take appropriate regulatory actions as warranted."

I guarantee you, when Combe, Inc, saw this release from the FDA, the only words they remembered from the whole report were FDA... will take appropriate regulatory actions... and then they started looking for a buyer for Cepacol before the medication got regulated into unprofitability.

(Oh by the way, FDA, the new owner of Cepacol is a foreign corporation rather than an American one. Thanks for that during this recession.)

Well, you could write to the FDA and to your local Congress-critter, but we all know that won't really do anything. Your best bet is to stock up on the old Cepacol formula wherever you can find it, and then give up on relief of your canker sores and sore throats once that's gone. That's what I'm doing.... 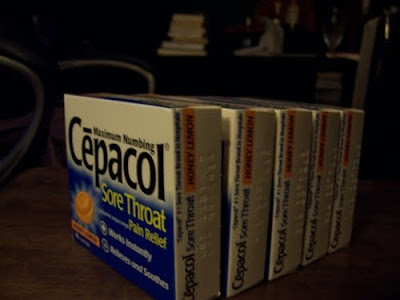 And by the way, next time you can't swallow, think to thank President Obama and his progressive FDA.
posted by Chris on Saturday, September 10, 2011
Newer Post Older Post Home