Who is Mark Cohen?

If you're a Paleo dieter and the name Mark Cohen means nothing to you, then I urge you to take a look at the list of speakers for the upcoming Ancestral Health Symposium. The fact that Dr. Cohen is speaking opposite Loren Cordain at the beginning of day 1 should tell you something about his standing within your own health paradigm. 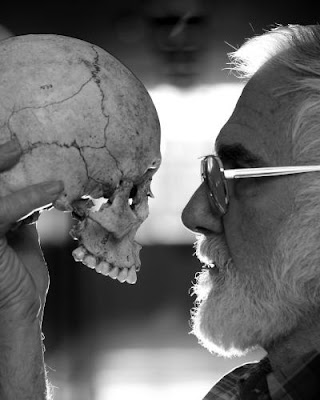 Today I intend to give a short introduction and upload some photos to the Interwebs. The intro will be personalized as I can't speak with authority on anthropology's academic community... 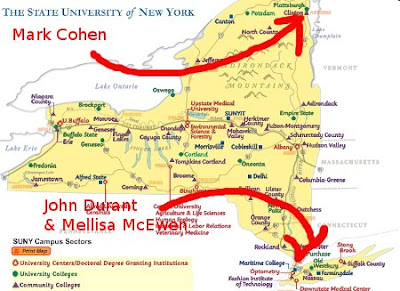 SUNY is New York State's bloated (see map above) public university system. PSU is in the far north-east corner of NY, opposite end of NY from John Durant & Melissa McEwen (see map above) and only a short drive from Montreal. To the east is Lake Champlain and to the west is the Adirondack Park.

Mark Cohen's international prominence and significant contributions to the scholarship have to do with paleopathology, but here is where my introduction must lapse for not knowing more about the history of paleo-anthropology. My understanding is that Cohen was the first to explore (sometime in the 1970s) the inter-disciplinary work of comparing the essentially medical expertise of forensic pathology with the archaeological expertise brought to bear by anthropologists. It is from Cohen's pioneering work in paleopathology that we know about the relatively healthy nature of paleolithic lifestyles and about the changes in health brought about by the introduction of agriculture.

Typical of Cohen's work is the article I wrote about a few days ago, although he is better known for the several books he's written such as Health and the Rise of Civilization (1989) (Google book), which Stephan recommends in his sidebar, but also notably The Food Crisis in Prehistory: Overpopulation and the Origins of Agriculture (1971). He was also a contributor to and editor of Biosocial Mechanisms of Population Regulation (1980), Paleopathology at the Origins of Agriculture (1984), and Ancient Health (2007).

And here is where my introduction gets embarassing, because as a very fat young boy, I grew up in Plattsburgh and my dad worked in the university with Professor Cohen. I was one of those soft, round-faced lads that sucked down cold cereal, pasta, and bagels and toast, while carefully counting each gram of fat in the belief that wheat was man's "natural" staple food and that if I avoided those grams of fat, the fat could not get added onto my belly.

Why did I believe this? I don't know. I had heard of Mark Cohen, but throughout my youth, I knew nothing about his actual academic work. How close I was in geographical proximity to being the first Paleo dieter in existence. And instead I thought Shredded Wheat was the secret to health.

It wasn't until my post-college years that I had even heard of Atkins. Ironically the thing that made me most interested in the Atkins Diet was the discussion of Egyptian pathology found in the back of the Eades' Protein Power. And the Paleo angle I didn't get until the NY Times ran the piece on Durant and McEwen that I linked to above. Now after all these years, I am finally coming around to understanding what Mark Cohen's academic work was all those years ago when he actually would have been available as a resource to me.

I knew of Mark Cohen because his name was bandied about in the circles of PSU's academic families, but I've only laid eyes on him one time. It's a slightly humorous anecdote.

Cohen's reputation was as a genius with something of an ego attached to his duly deserved academic accomplishments. In the late 1980s and early 1990s, I used to hear stories of the students treating him sycophantically and of his classes being over-enrolled. As the son of a professor myself, I couldn't quite imagine students doting on a teacher.

Around 1999 or so, I was in the library at PSU attending a presentation of a SUNY Distinguished Teaching Award when I noted a gaggle of hippie-ish but nonetheless attractive young women who were crowded around an old white-haired man. They were treating him like a rock star, and the group was in its own world, not paying attention at all to the presentation. In truth, I was a little annoyed that, as the youngest and by all accounts best-looking man in the room, I wasn't getting at least a little attention from these apparently randy co-eds. I leaned over to the man sitting next to me and asked, pointing, "who is that man over there?"

After Cohen retired, he was profiled in Plattsburgh Magazine, PSU's alumni magazine. I have scanned and uploaded the article for your reading pleasure as a PDF in Scribd. Hopefully, no one will make a fuss over the copyrights as I don't think these were available anywhere else.


tracking him down today

I went to the anthropology offices at PSU a few weeks ago to see if there was a way I could contact Professor Cohen. He maintains a mailbox in Redcay Hall that is labeled in thick bold marker "PAPERS ONLY. NO MAIL PLEASE." No mail. Now there's a reason to be interested in the Paleolithic!