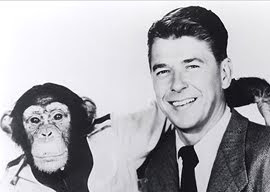 While chimps and bonobos are interesting comparison studies of human behavior, the fact that we name them with cute names in order to remember anything about them should give us an answer as to the question raised by the subjects in the documentary. That is, the ability of chimps to acquire language ability like humans. If the researchers had really believed Nim would grow up to have language abilities, they would have named him something like Albert or Thomas and expected him to exhibit mature behaviors.
posted by Chris on Wednesday, July 27, 2011
Newer Post Older Post Home