My gallbladder came out

My gallbladder came out a week ago. You probably think it's my fatty diet. I'd like to dispel that notion.

Last September, I got up to go to work and had a tummy ache. As I showered and rode my bike down to the hospital, it got progressively worse until I was doubled over and feeling short of breath. I went to the ER, worried I was having a heart attack, but 2mg of morphine and an ultrasound later I learned I had passed a gallstone. All was well after a day's rest.

A few months later, I had two hamburgers and went to bed. Waking up in the middle of the night, I recognized the pain this time and went straight to the ER for morphine. But this time, 6mg of morphine, 3mg of dilaudid, an ultrasound, and a CT scan later, I didn't have an answer. Luckily, I refused to be sent home (the ER physician wanted to send me home with percocet when 3mg of IV dilaudid was just letting me sit still!!). A hospitalist was consulted, and a HIDA scan ordered. No passage into the gallbladder.

Having now seen several routine surgeries go wrong, with patients ending up in the ICU, I elected to have the laparoscopic cholecystectomy done at another hospital: my co-workers were already joking about charging admission to my room. Having the gallbladder out was not something I wanted to do, but the increased risks of pancreatic complications swayed me.

what the gallbladder does

People who have even a passing notion of human physiology understand that the gallbladder is a storage unit for bile, which the liver excretes to help digest fats. The gallbladder contracts when fats enter the digestive tract, excreting bile into the small intestine. 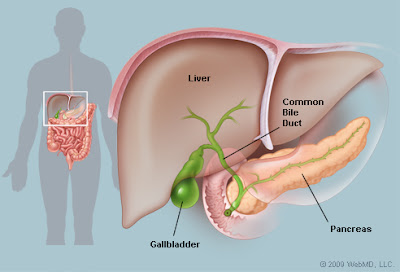 Bile is composed of salts of cholesterol, which, as everyone knows, is also a substance that the body absorbs. So there is actually a cholesterol utilization loop in the body: the liver excretes cholesterol into the small intestine in the form of bile; when bile has done its work, the cholesterol is re-absorbed and sent back to the liver to be turned into bile again.

Occasionally, the bile in the gallbladder will solidify into gallstones, which can get stuck in various ducts and keep the bile from entering the small intestine. In this case, it is often advisable to have the gallbladder removed.

If the gallbladder is removed, bile enters the small intestine directly from the liver. Rather than being stored in the gallbladder, the bile gets sequestered by an intestinal sphincter.

Since bile helps digest fats, it would seem intuitive that eating more fat would lead to increased bile production, increased bile storage in the gallbladder, and that, subsequently, you would have an increased risk of gallstones from eating a high-fat diet. And if you've had gallstones previously, you've probably had a doctor tell you not to eat high-fat meals. But the reality is more complex and less intuitive.

If you've had a doctor tell you not to eat high-fat meals, it is not because the doctor thinks you will avoid developing a gallstone by eating low-fat. If your doctor actually told you this, either he is an idiot or he is simply lying to you so that he doesn't have to try to explain any more physiology than he already has.

In reality, gallstone formation is a complex process. Much more complex than simple more bile=more gallstones. There is more than one type of gallstone, and the medical community is not entirely sure why some people get them and some don't.

Your doctor is telling you not to eat high fat meals because the gallbladder contracts in response to fat entering the digestive tract. Your doctor's idea is that if you eat low-fat, you may avoid having the gallbladder push a gallstone into a duct. This is like a duck-taped, fix-up response to gallstones, but it isn't actually a solution and doesn't mean low-fat diets=gallbladder health for the general population.

The way to establish that high fat diets increase gallstone problems is through epidemiology, and according to the surgical textbooks available in Elsevier's MDConsult database, the relationship isn't established. Although I haven't looked at actual research papers, my guess is that there isn't any evidence of a connection, but that some people would like there to be and keep looking for one. In one paper abstract from PubMed, vegetarianism had no effect on gallstone formation, while alcohol consumption decreased risk: 20802339

In fact, what there is evidence of is increased risk of gallstones from weight loss and use of statin medications. So stick that in your pipe and smoke it. (Actually, don't.)

that's all I got

I had originally wanted to make this a research-based post, but I find I have not nearly as much time these days as I had. As I was thinking about this post, I thought of a great series of research-based posts, debunking the evils of dietary fat on an organ-by-organ basis. Maybe if I lose my job someday I'll do that.

I didn't die from the laparoscopic cholecystectomy. About 40% of patients have to convert to an open surgery, but I had begged to please, please not do that. Apparently, my gallbladder was very scarred and entangled and probably the surgeon would have normally converted, but instead he spent a long time working on me and finished without opening me up.

In the course of the surgery, they had to put me in reverse-trendelenburg position (head above heels), which means a lot more of the CO2 they put into your abdomen went into my upper body than would normally happen. So I had about 3-4 days of intermittent excruciating pain in my Right shoulder and still have some ongoing RUQ pain. But other than that, things seem to have gone smoothly.
posted by Chris on Friday, July 08, 2011
Newer Post Older Post Home