My gallbladder was out last Friday, and over the weekend I was convinced to go visit my brother in Denver, CO. It was a risk, being only two days out from surgery, but drugged out from PO Dilaudid, flights went smoothly despite massive abdominal distention and various pains.

Well, let me tell you, Denver is a well-kept secret. The west coast is famous for having places that people want to move to in order to live certain lifestyles. Seattle, SF Bay, LA... I had always thought of Colorado as a place for cowboys and skiers. Turns out, it is a hidden paradise. A Shangri-La of the Continental Divide.

My brother had been telling me for months about how great the weather is, and it is. The place is just dry enough and just sunny enough to be warm and have perfect humidity on most days while having just enough rainfall to keep the city green. Unlike my home near Montreal, where we had 3 straight weeks of rain or clouds earlier this summer, Denver only gets rain in spurts of a few minutes. On my last day there, a heavy rain lasting a couple hours made the city shut down. My brother's girlfriend got seriously upset. I laughed.

Of course, the Rockies are not too far away. On the 4th of July, my brother drove me to see Loveland Pass and the Arapahoe Basin ski area, where skiers were getting in their Independence Day runs. The mountains rise out of the plains in a way you don't find on the East Coast. On this merit, Boulder, CO, is even more beautiful than Denver, but Boulder feels exactly like Burlington, VT--i.e., a college town full of college students who can afford to be hippies because someone else is paying their bills. I have always hated Burlington because it is full of possibilities that are low in quality but high in the style necessary for social signaling. Boulder feels the same way, but Denver is too mainstream and diverse to pigeonhole this way. 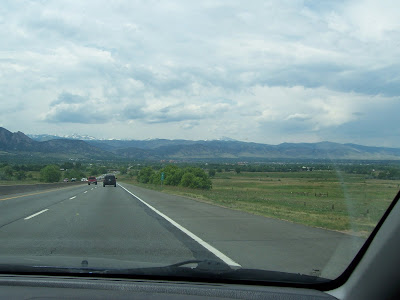 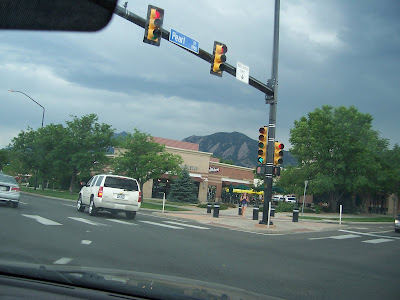 The city itself is handsome. Apparently it burned down at one point and was rebuilt in brick and stone. There are a lot of what seem to me beautiful old stone and brick homes, even in my brother's neighborhood, which is Denver's "ghetto." Having lived in Washington, DC, and Philadelphia at various times, I can tell you that Denver does not have a proper ghetto. My brother's neighborhood is a mix of houses of southwestern design, brick boxes, and old well-cared-for homes like the one in the photo below. 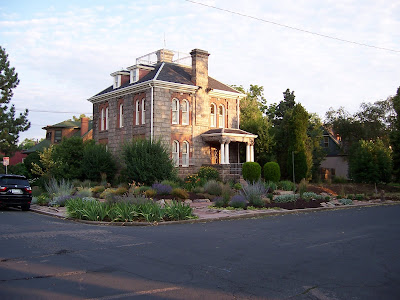 Among large shade trees, there is a community coffee shop a couple blocks from my brother's house that serves on an outdoor patio espresso at 7AM and wine at 7PM. Awesome. If you walk your dog there at 6:30AM, you will meet 4-5 slim young women walking their own dogs. If the community coffee isn't good enough for you, you can drink at Pablo's, the center of Denver's small but thriving hipster population--an easy bike ride away from my brother's house (as is any other location in Denver). Pablo's is the second-finest coffee I have had, taking a back seat to Cafe Myriade in Montreal.

If hipsters are not your thing, you may be interested in the REI headquarters or one of Denver's many professional sports teams. My brother says that several apartment complexes next to the baseball stadium are prized housing by baseball fans. You have to be a real fan to choose to live next to the stadium, but it would cut down on getting stuck in traffic, a problem at game time that makes it difficult to eat at the many Mexican restaurants in the downtown area. (BTW, Casa Bonita is a real place, and I only barely managed to avoid going there as all Denver locals who were asked said the food is terrible.)

And if you're not into fried tacos with modelo or margharitas, you may care to dine at Le Central, my brother's favorite restaurant. They specialize in mussels but had also flown in lobsters from Maine when we were there. It was my first experience of St. Germaine--mixed with soda water, champagne, and a twist of lemon it was delicious. The only thing that detracted from Le Central (other than their crappy website) is their bread. But this is a chronic problem in Denver. At 5000+ft., you cannot bake there. Want a New York style pizza? Forget it.

But I forgive Denver its baking deficiency, for it offers at least three homemade ice cream shops--each with distinct styles of ice cream, and all worth eating. Plus, I don't eat bread.

Is there a deficiency to the place? Depending on your views, you may disturbed by the many outlets for purchasing medical marijuana. But the real problem is a lack of lake. If you come from New York, Minnesota, or another state with many waterways, you will be highly disturbed at being unable to swim at a beach during the 90-100 degree temps. But, again, it is a dry heat.

On the last night, I went with my brother and his roommate, "Bildstein", to The Walnut Room, a fine restaurant-bar-venue where I could drink Knob Creek on the rocks before leaving for DIA to board my JetBlue flight.

In this time of Tour de France, let me leave you with a video of my brother riding at Boulder's velodrome, a 30 minute drive from Denver and only $5/hr.
posted by Chris on Saturday, July 09, 2011
Newer Post Older Post Home