"sane and rational": an approach to swine flu 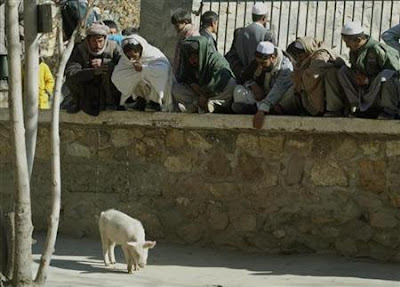 Despite the deaths, the swine flu has not been without its humorous side. For example, in Afghanistan, Kabul Zoo quarantined that nation's only pig. The pig was a gift from China, which has taken the slightly less humorous action of quarantining a number of visitors from the Americas. Where does public health wisdom lie?

Writing in Virology Journal, William R. Gallagher of the Louisiana State University Health Sciences Center has reviewed the situation up to the current time and makes recommendations based on a skeptical view of the severity of the current outbreak but a healthy respect for the future of H1N1. The current form of the virus has more animal amino acid sequences than sequences from successfully pathogenic human strains. Nevertheless, the hemagglutinin sequence has shifted 27.2% from its 2008 cousin, and the neuraminidase has shifted 18.2%, leaving open the possibility that new rearrangements might incorporate more pathogenic human sequences along with these new H and N sequences to create a strain with greater pandemic potential.

Gallagher takes the sensible positions that shutting public services because of a suspected case, having elected officials override considered public health judgements, or bringing political agendas into the situation are all counterproductive. While I agree in large part, I'm not sure I can accept his argument that there's no sense in a quarantine focused on specific nations due to the fact that the specific H and N sequences arose elsewhere. It's true that some people have made uninformed calls for border closings, but I think the accusatory finger of political agenda should fall on Gallagher as well. The theoretical possibility of a future spontaneous re-arrangement is not an equivalent threat to an existing, spreading re-arrangement, especially when it's not clear, by Gallagher's admission, whether the pandemic nature of the outbreak might have been supressed due to natural seasonal variations, only to expose itself again next season. In any case, the current best course of action would seem to be to start working on a vaccine for this strain for next season.