In theory, I've now graduated from nursing school with a BSN. In fact, I've completed only the commencement ceremony today, and the actual graduation won't be finalized until after this semester's grades are turned in and all the i's are dotted and t's crossed. My name wasn't in the program for the commencement, but I assume this is because I turned in my graduation application to the registrar too late. Am I concerned? A little. The professor for the Community Health course is not trustworthy in my opinion, and we don't have tests in that course. Instead the final grade is based on her assessment of an overall portfolio of your work that is turned in at the end of the semester. The syllabus was a mess, and I'm not sure I turned in all the work for the course. Even so, I should be okay as long as she decides I'm sufficiently socialist for her liking. Anyhow... 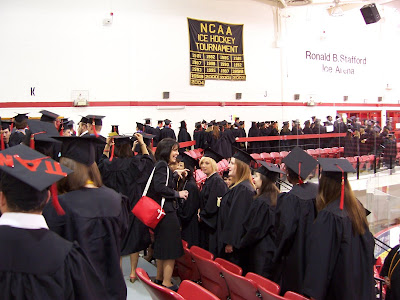 Commencement takes place in the gym of the college's field house--the only indoor venue large enough. It's pretty standard decorating fair, although they do well for a gym. A few years ago, a bagpipe band started leading the processional and recessional, which is a nice touch. 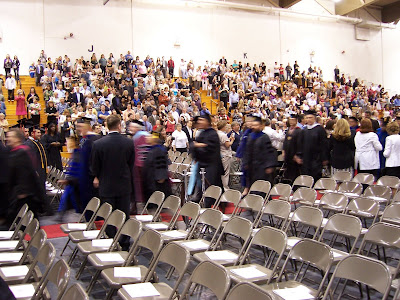 The student commencement address was given by a nursing student this year. The practice of choosing a commencement speaker based on grades is fairly dubious. My fellow nursing grad was smart enough but mostly just studied a lot, and her speech reflected that. It was schlock about going beyond your career path to become the type of person you want to be. Spoken like someone who has spent her entire life locked in an academic prison. Most of the grads there were, instead, in the position of having to face a career after spending the last four years exploring what type of person they were! We also had a speaker who's a star on some TV show and came back to college to finish his degree, but I don't watch enough to have any sense of his importance.

Then it was on to filing across the dais to shake the president's hand... 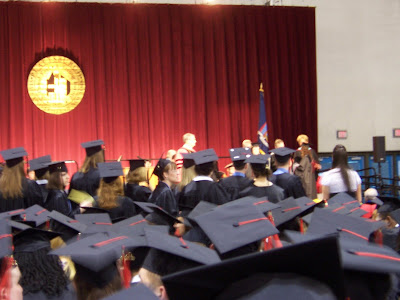 A family friend who is a professor was sitting in the front row as I came across the dais and gave me an embrace, which was really both unexpected and affecting as the rest of the ceremony was both anti-climactic and overshadowed by the aforementioned Community Health question as well as the upcoming NCLEX exam. For myself--and I sense this is the case for most nursing grads--passing the NCLEX is going to mean a lot more to me than graduating from nursing school.

Actually, if I'm honest, I'd have to say that nursing school, despite being in a BSN rather than ADN program, bears so little resemblance to the academic experience that I had in previous university study that I don't feel as though I've finished what I started and finally graduated from college per se. It was more like some sort of boot-camp-college-game-show amalgam for which you had to jump through successive hoops while attending classes and keeping the drill instructors happy. Although I have a full grab-bag of skills and disparate formal training, I don't feel that I've acquired a consistent body of knowledge or methodology. (The "nursing process" is too generalized and accessible to common sense to justify four years at university and tens of thousands of dollars.) At the outset, I was expecting to receive knowledge of "people as patients" and "patient care." Instead, it's a little petite medicine training, a little management, a little social science research... This makes me a little despondent. I came only for job training, but I got something else very different that's supposed to be academic and professional, but I can't define it well.

At end of the ceremony, the mace recesses down the aisle followed by the honored guests and faculty. Then the pipe band leaves followed by the newly graduated students. I had intended to get just a 30 second clip of the pipe band, but since I didn't know where they were in the line, I ended up taping the entire recessional. This has the advantage of showing almost everyone in the ceremony. The original .MOV file can be downloaded from the Vimeo site, and it should have better quality, I think.

The one part of the day I was really looking forward to was having my photo taken outside after the ceremony. Over the years, my father has brought home a stream of photos taken outside in the same place with his graduating students, so I thought it would have been nice for him to have one of me with him as the parent instead of the professor. Alas, it was not to be. By the time we got outside after the ceremony, the rain was coming down quite hard. As my mother pointed out, it was the exact same weather as the day I graduated from high school. I hope that's not an ill omen, as my post-high school plans didn't play out very well. Anyhow, family photos got relegated to the living room. 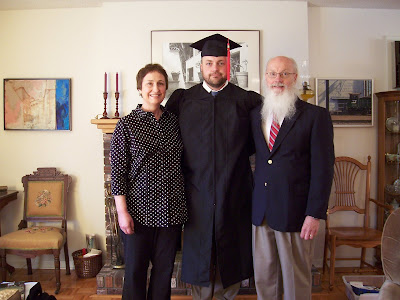 During lunch that day ("Tuscan tuna salad"--tuna, beans, onions, olive oil, wine vinegar, spring greens--it's nice to be back off the studying/library habits), I asked my father whether he had heard of artist Catherine Hartung, who I mentioned a couple posts back. He said, "Oh, you mean Kate?" It turns out she used to babysit me! The world is a small place, especially in upstate New York.

My brother had told one of the waitresses that he was going to McSweeney's that evening for dinner, so we decided to all go and then on to Harrigan's for dessert. It was a real north country eating out experience.

...well, the first thing is to lie low until grades are finalized. Then, after I'm sure I've graduated for real, it's a marathon study session for the NCLEX. Of course, I have to figure out what I'm going to do with my life, too.