Effects of night shift on metabolism

Nursing is one of the professions that includes regular shift work. Traditionally, new nurses start off on the night shift and work their way to days as they increase in seniority and skill. In fact, on my floor, there are a number of nurses who work nights by preference. There are advantages that mainly involve different variations of not having management breathing down your neck. However, the night shift tends to be full of people who are overweight and look worn out. It isn't just my imagination, either. Research shows that night shift workers tend to have higher rates of chronic diseases, and now research published in the upcoming version of Proceedings of the National Academy of Sciences examines the metabolic changes that may underlie some of these chronic disease problems. 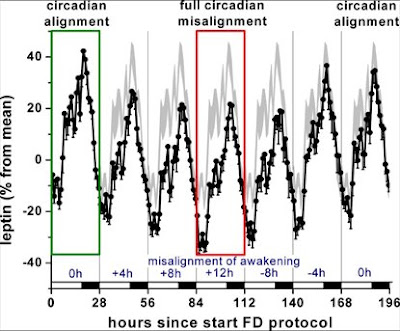 Results of other measurements such as epinephrine, norepinephrine, glucose, etc. demonstrated essentially stressful and adverse reactions to the shift work.

Although my intuition from having worked nights for a while is that this research is pretty much on the money, there were a few possible problems. For example, subjects seem to have been sequestered from sunlight (so that they wouldn't know where in a 24-hour cycle they were), and they were given food rather than being allowed to eat what they wanted. Were they given tasks to perform during their "days"? It doesn't say. Most problematically, they weren't allowed to exercise. From what I can tell, the exercising night shift workers are able to deal with the stress of working night much more easily than the non-exercising workers.

Of particular interest to me from the results was the fact that de-synchronized shifts created pre-diabetic states in 30% of the subjects, but not all of them. It would be interesting to follow night shift workers now and see if similar epidemiological results could be found by controlling for weight and eating habits.

Anyhow, I think this report justifies the $1.25 per hour shift differential that I received on nights.