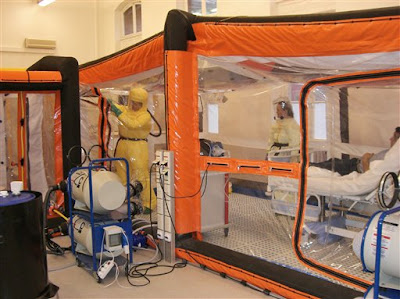 The ebola researcher who received a needle-stick recently is being given a new vaccine. Photo above is of a quarantine unit at Hamburg University Hospital in Germany...

A scientist accidentally pricked her finger with a needle used to inject the deadly Ebola virus into lab mice. Within hours, members of a tightly bound, yet far-flung community of virologists, biologists and others were tensely gathered in a trans-Atlantic telephone conference trying to map out a way to save her life.

Less than 24 hours later, an experimental vaccine — never before tried on humans — was on its way to Germany from a lab in Canada.

And within 48 hours of the March 12 accident, the at-risk scientist, a 45-year-old woman whose identity has not been revealed, was injected with the vaccine.

So far, so good. If the woman is still healthy by Thursday, she can consider herself safe.

Dr. Stephan Guenther, head of the Bernhard Nocht Institute for Tropical Medicine in Hamburg, where the researcher was working, said tests so far show the scientist is healthy and free of the virus.

The peak period for an outbreak during the 21-day Ebola incubation period passed this week, he said.

"We are now on the downside," Guenther told The Associated Press, noting that with each passing day the chance of infection taking root diminishes.

It's not entirely clear the researcher was actually infected with the virus. At the time of the accident, she was wearing three layers of protective gloves, and though the needle stuck her, the plunger of the syringe was not pushed so it's not certain the virus entered her bloodstream.

That means scientists may never know if the vaccine worked or she was just lucky.

There are two other known accidents involving researchers who came into direct contact with a similar strain of Ebola. A Russian researcher died, and a British scientist became ill but survived.

After the needle stick, Guenther knew he had to act swiftly.

He rushed an e-mail to fellow scientists in the Ebola research community. One was Dr. Heinz Feldmann, chief of the virology laboratory at the Rocky Mountain Laboratories, a U.S. National Institutes of Health research facility in Hamilton, Mont.

"We considered this as serious as (the Russian) case, in terms of the exposure," Feldmann told the AP in a telephone interview last weekend.

Feldmann was part of an international group of experts from the U.S. Centers for Disease Control and Prevention, the U.S. Army Medical Research Institute of Infectious Diseases, the Canadian Public Health Agency, Boston University and the University of Texas Medical Branch.

Feldmann, Guenther and several other experts took part in the teleconference debating the options. These included a live vaccine never before tried on humans, another treatment designed to interfere with the virus' ability to multiply, or an anticoagulant that Army research found had saved the lives of monkeys exposed to Ebola.

The option that emerged as the strongest was the vaccine, which had been developed by Feldmann and collaborating researchers at several institutions. Much of the key work was done about nine years ago at a microbiology research lab run by the Canadian government in Winnipeg, Manitoba, where Feldmann worked at the time.