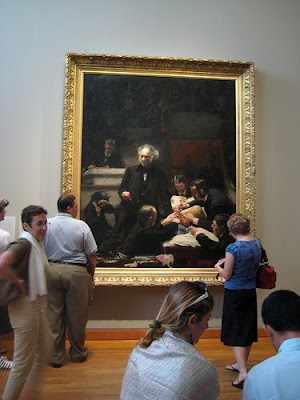 Dr. Wes has an art-related post today, so I thought I would take this opportunity to draw your attention to an article I enjoyed from American Arts Quarterly on Thomas Eakins' The Gross Clinic (seen above).

From 2007, James F. Cooper makes an interesting analysis of the painting...

Eakins’s monumental effort, eight by seven feet, portrays the celebrated surgeon Dr. Samuel D. Gross removing a piece of infected bone from the thigh of a patient suffering from osteomyelitis. Five doctors are assisting him in this delicate operation. The surgery is being observed by almost thirty medical students in the amphitheater at Jefferson Medical College. Gross is depicted deep in thought, pausing momentarily with scalpel in hand. A strong light from above illuminates the dome of Gross’s head and the heads of the doctors working on the patient. William Innes Homer, author of Thomas Eakins: His Life and Art(Abbeville Press, 1992), compares The Gross Clinic to Rembrandt’s masterpieces The Night Watch (1642) and the Anatomy Lesson of Dr. Tulip (1632). Homer praises the American artist, but the comparison immediately draws attention to what is wrong with Eakins’s painting. The darkness surrounding the figures in both Rembrandt works is rich, and the deep velvet blacks add greatly to the atmosphere. The black background which covers almost two-thirds of The Gross Clinic is essentially a dark wash tinted with red. All of the doctors and several of the students are dressed in black, including the patient’s mother, shown directly right and below Dr. Gross’s right hand. The perspective of the painting is askew because Eakins has used white in the background behind Dr. Gross to frame his own self-portrait (the figure seated in the first row of the auditorium sketching the scene). The chalky white of the table he is drawing on sits visually on the surface of the canvas, refusing to recede into the background. To make matters worse, Gross’s shirt is almost the same tone and chroma as the tabletop behind him. Eakins takes no advantage of the painting’s apparent “flatness.” He makes little attempt to organize the figures and the negative or “empty” spaces between figures into formal, cohesive elements of color and line, which communicate visually with each other and the entire composition. Indeed, his preparatory oil sketches for the final work reveal the same confusion and murkiness.