Tonight I made the mistake of reading some Salon.com writer named Glenn Greenwald. I followed a link to his article on Obama's worse-than-Bush wire-tapping policy, then got interested in his report on Portuguese drug de-criminalization. But then I made the big mistake of reading some of his shallow mud-slinging partisan whining, and watched a clip from the Colbert Report.

As someone who purposefully avoids filling my head with the group-think crap that passes both for commentary and for comedy these days, I am always disappointed when I make the infrequent venture into TV or pundit land. Colbert's satire of a truly pathetic melt-down by some other pundit named Glen Beck is immature, pointless, and not humorous. Plus, he goes on to provide us with another image of "the sexy nurse," looking like nurses never look anymore (or ever did, actually). 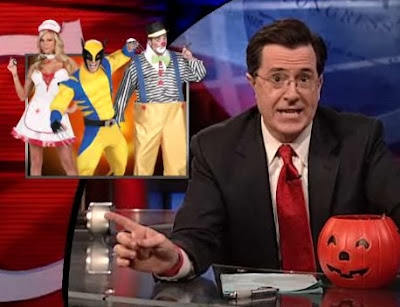 At least by juxtaposing the sexy nurse with Wolverine, we can choose to believe the implication that the sexy nurse is a fictional character, but I know that wasn't the intention. As I asked previously on this blog, wouldn't the sexy nurse be less likely to be a legitimate mascot the closer one gets to a medical organization, and if you're going to have a fantasy about a nurse, wouldn't you want to fantasize about someone who actually looks like a nurse rather than someone wearing lingerie, holding a sharp object, and wearing a stupid-looking infantalizing hat that dates from decades ago?
posted by Chris on Tuesday, April 07, 2009