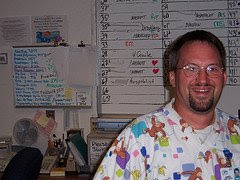 This photo is from my Flickr stream and is one of my great co-workers (as opposed to my not-so-great co-workers, of which there are enough). His mother died recently. Because our local paper wasn't on top of things, the online obituary notice for Linda Lamica wasn't available at the time of the funeral, but it is now:

TUPPER LAKE — Linda Mary Lamica, 59, of Plattsburgh and formerly of Tupper Lake, died peacefully with family at her side Wednesday, Nov. 19, 2008, at CVPH in Plattsburgh after a brief battle with cancer. Linda was born May 23, 1949, in Tupper Lake, the daughter of Irvin and Rita (Grenier) Lamica.

She attended Holy Ghost Academy until her junior year and with the school closure, transferred to Pius in Saranac Lake, graduating in 1967. She then went on to attend CCBI in Syracuse. She worked mainly in Social Security benefits and lived in the Syracuse area the majority of her career. She had a variety of interests, including traveling, skiing, snowmobiling, crocheting and other crafts.

She is survived by one son, Jared Lancor and his wife Erin of Plattsburgh; two sisters, Anne Marie Bedore and her husband Glenn of Tupper Lake, Jeanne Lamica of Plainfield, Vt.; two brothers, the Rev. Alan Lamica of Saranac Lake and John Lamica and his wife Dina of Tupper Lake; nieces and nephews who include Emily Churco of Buffalo, Jesse Bedore of Tupper Lake, Kaley Cook and Kyle Cook.

She was predeceased by her parents in 2007.

Calling hours will be held from 10 to 11:45 a.m. Saturday, Nov. 22, at the Stuart-Fortune-Keough Funeral Home in Tupper Lake. A Mass of Christian burial will be celebrated at noon at St. Alphonsus Church with Father Alan Lamica officiating. Burial will be in the parish cemetery.

Those wishing to make memorial contributions are asked to consider the American Cancer Society or High Peaks Hospice.

Online condolences may be made at www.stuartfortunekeoughfuneralhome.com