In a panic for a paper due tomorrow in Nur428 Management, I almost forgot that today is Pearl Harbor Day--commemoration of the attack on the US Navy base at Pearl Harbor, Hawaii, on December 7, 1941. Over at The Corner, Stephen Spruiell has visited a gathering of Pearl Harbor veterans in Texas...

...85-year-old Frank Curre Jr., agrees to talk to me. His story is harrowing. He was only 18 when his ship, the U.S.S. Tennessee, was bombed in the attack. He saw the U.S.S. Arizona explode when a bomb ignited its ammunition magazine. He describes the resulting carnage as “like someone threw up a box of popcorn into the air, the popcorn was the men coming off her.” 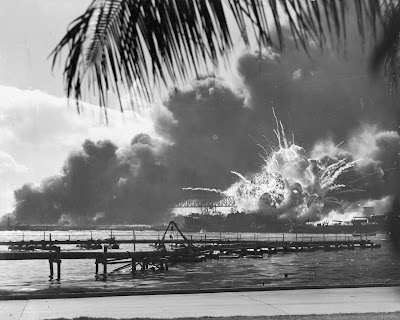 Of course, nurses were at Pearl Harbor, too. Lieutenant Ruth Erickson remembers...

The first patient came into our dressing room at 8:25 a.m. with a large opening in his abdomen and bleeding profusely. They started an intravenous and transfusion. I can still see the tremor of Dr. Brunson's hand as he picked up the needle. Everyone was terrified. The patient died within the hour.

Then the burned patients streamed in. The USS Nevada (BB-36) had managed some steam and attempted to get out of the channel. They were unable to make it and went aground on Hospital Point right near the hospital. There was heavy oil on the water and the men dived off the ship and swam through these waters to Hospital Point, not too great a distance, but when one is burned... How they ever managed, I'll never know.

The tropical dress at the time was white t-shirts and shorts. The burns began where the pants ended. Bared arms and faces were plentiful. Personnel retrieved a supply of flit guns from stock. We filled these with tannic acid to spray burned bodies. Then we gave these gravely injured patients sedatives for their intense pain.

Orthopedic patients were eased out of their beds with no time for linen changes as an unending stream of burn patients continued until mid afternoon. A doctor, who several days before had renal surgery and was still convalescing, got out of his bed and began to assist the other doctors. 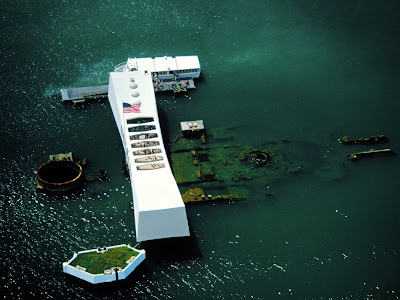