We received a "cool" admission the other day in the Step-Down unit at CVPH. Normally, I wouldn't be able to mention this because of HIPAA laws, but it was written up in our local newspaper, so let me simply repeat what's already out there: 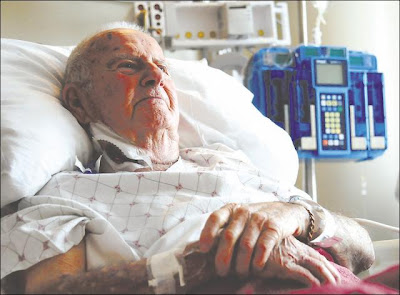 He almost didn't make it.

"I guess I'm a miracle baby," Sartwell said from his comfortable bed in the Intensive Care Unit at CVPH Medical Center.

Sartwell went from his Peru home into the woods in Clintonville to check on a few things at a tool shed Sunday.

His vehicle got stuck, and he started walking out of the woods. But he got tired and sat down for a moment to catch his breath and fell asleep.

He wasn't found until the next day, when a logger driving by noticed something and went to check it out.

Sartwell's body temperature had dropped to a dangerous low of about 80 degrees Fahrenheit.

After a CAT scan to determine if Sartwell had fallen and hit his head, Abbott put Sartwell on a heart-lung bypass machine.

The machine, hooked up to a main artery in Sartwell's neck, actually warmed his blood up to a safe level in just under an hour.

"It helps to have the right patient."

A few days later, Sartwell was resting comfortably and giving his nurses a hard time -- with a smile, of course.

Sartwell doesn't remember exactly what happened to him, but he is grateful for the help he received.

"I guess I went a little brain dead," he said.

"That was quite an experience, but I wouldn't want to go through it again."

Sartwell was dressed in cotton pants, boots and a regular jacket.

"If I had known I was going to stay overnight I would have dressed better," he joked.

Dr. Abbott was pleased to see his patient doing so well.

"It's important for people to know that we have this technology. This is the North Country, and a lot of people are outside in the cold, and this sort of thing does happen."