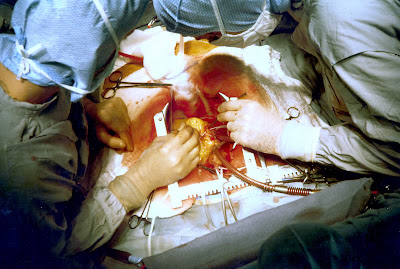 Last semester, after my perioperative rotation, I asked if I could go back and observe an open heart procedure. The request was granted, then I was bumped in favor of a nurse I work with on R-3. But I kept at it, and I was finally allowed in yesterday, Sept 11. It was a fantastic experience.

For preparation, I wanted to find some material that would explain whether there were anatomical structures I should know not covered in A&P and some material that would explain the procedures (beyond patient education). I found a great resource in Cohn's Cardiac Surgery in the Adult, 3rd ed., which is provided full-text online for free by CTSnet.org. (Unfortunately, I didn't find it until the night before the surgery, so I didn't have time to prepare. The only major thing was that I don't remember discussing the annulus of the heart valve in A&P, and that was a major knowledge component for following the surgery. A little embarrassing, but I'll live.)

I arrived at about 0530, grabbed breakfast in the cafeteria, and then headed up to meet the patient around 0630 and follow down to the pre-op setting where the patient was interviewed by the nurses and anesthesiologist.

The actual surgery started sometime around 0730, and at the point at which the patient went on bypass, I had a view from the anethesiologist's spot at the head of the bed that was essentially the same as what is shown above. (The surgeon operated on my right and his PA stood to the left.) We brought the patient to the ICU directly from the OR around 1500. In the meantime, I guess I was expected to take several breaks, although the whole procedure was so interesting that I stood through the whole thing and didn't really notice the cold. The only break was a quicky around 1230 that they strongly suggested I take. The standing and cold were much easier to take due to the quite good mix tape/CD that was playing throughout the procedure--some oldies like the Stones mixed with some modern bands. The transitions wre well done and good at keeping one in "the zone" throughout the surgery.

Although I was only interested in having a clearer understanding of what the cardiac surgeon does (because of some less than smooth interactions between him and the staff on my floor in the hospital), people kept asking me whether I thought I would enjoy working in the OR. I had definitely ruled it out following my previous perioperative rotation, but this surgery was something quite different. And if there were a possibility of acting as an RNFA, that would be a career worth pursuing...

Anyhow, wish I could say more, but it would probably be a HIPAA violation. Also, I remain a little overwhelmed by the whole thing. I keep thinking about the procedure, but when people talk to me about it, I don't have anything to say. In some ways, the procedure was very domestic and routine, while in others it was full of machismo, with a Damocles sword hanging above everyone. It's the best thing I've experienced since I entered nursing school.
posted by Chris on Friday, September 12, 2008