This morning, I got up bright and early and rode my bicycle up to the Day's Inn to get an echo with M-mode and AAA done. This was courtesy of the folks at ultralifebodyscan.com.

The tech who performed the scan was an older gentleman who had an Eastern European accent (Hungarian?) and reminded me of the actor Armin Mueller-Stahl in the movie Eastern Promises. 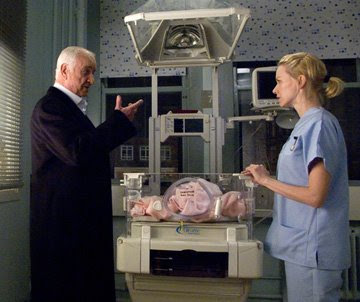 (Eastern Promises, by the way, is not only a good movie in its own right, it is a great movie for portraying a nurse as something other than a sex object, a matron, helpless or simply just an extra. I guess Naomi Watts as Anna is technically supporting cast, but she is a nurse-practitioner, and appears in no scenes being subservient to doctors. Plus, Viggo Mortensen is from a town nearby where I live in upstate NY. So, Eastern Promises is, I guess, as near as possible to an officially-sanctioned CXLXMXRX film.)

Anyhow, after it was all over this tech looked at me shrugged, nodded his head, and said in his Hungarian accent, "you're a good guy, Chris." What is that supposed to mean? Does it mean you are in good health or it's not your fault? I have to wait two weeks for results. Hopefully, this company, which looks a little shady to me, won't steal my credit card number or sell my echo to insurance companies...
posted by Chris on Saturday, September 20, 2008