Derbyshire's The Talk and hypocrisy

I tried to tune in to RadioDerb today, but the regular Friday broadcast from Buckley Towers in the heart of Manhattan was silent. On investigating, I discovered that Derb has drawn some attention to himself with the publication of an essay known as "The Talk," about advice people could give to children, and which many people find offensive for its racial content. Forbes magazine called for him to be fired from National Review, and NR editors are Tweeting their disapproval/disavowal. 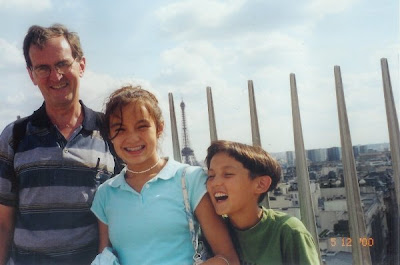 Derbyshire: gives The Talk "in bits and pieces as subtopics have arisen"
The Atlantic magazine claims Derbyshire hasn't been fired from National Review previously because he is useful for drawing in money from racist donors. I can say that I've attended an NR "fundraiser" in the form of an NR cruise, and I find The Atlantic's position laughable. Not just wrong, but laughable.

NR does not appeal to backwoods rednecks for funding. Derb is a math geek, sort of nerdy and... not a schmoozer. Even less does NR appeal to those who'd be interested in donating to VDARE or similar publications where Derb geekery would be appreciated.

The talk among NR staff and potential donors on an NR cruise sounds very much like any other people from the urban upper middle classes, with paeans to diversity included. NR editors are just modern American urbanites with slightly different views on deficits and taxes from those on the left. Derb says this outright in his book We Are Doomed, pointing out that, despite its image, National Review is full of atheists who are completely at ease in the East Coast urban cultural milieu.

As far as race goes, the class of people to which NR editors belong are mostly hypocrits. As one federal government employee likes to point out, the type of upper middle class white person who works and lives in Boston, NYC, Philly, etc actually acts as though they believe what's in The Talk despite what they tell each other or themselves. When I moved to Crystal City to work in Washington, DC, I was told by a Democrat who graduated from the hyperliberal "Kremlin on the Crum" not to take a certain exit ramp while driving into our fair capital or I wouldn't make it out of the neighborhood alive.

Commenting on The Talk at TakiMag, "clairesolt" writes:

I do think some of the advice should be race neutral. when people asked me about living in DC being scary, I always replied that you stay away from bad neighborhoods everywhere. btw, there are very good black neighborhoods in DC.

This is more typical that the advice I got. "clairesolt" lives her life knowing that it is too dangerous for her in certain black neighborhoods. But she makes qualifying statements in order to avoid any cognitive dissonance. "clairesolt"s term "race neutral" doesn't mean without noticing race, it means without talking about race.

The year I was in Washington, there were people who simply wouldn't go into the city on certain days if there were demonstrations. This is essentially the same attitude as Derbyshire's bullet point number 10, which Gawker calls a "hideous monstrosity." Most people in DC probably assume there are important differences between their views of crime risks and Derb's, but there aren't. The difference is only in what type of social signaling you want to send.

If you doubt the hypocrisy, consider what is arguably The Talk's most cynical advice, that whites should cultivate black friends. Now take a look at Stuff White People Like #14. Derb's advice is internalized widely enough that it could be incorporated into self-effacing humor four years ago. Just make sure you don't talk about this stuff any more seriously than SWPL. 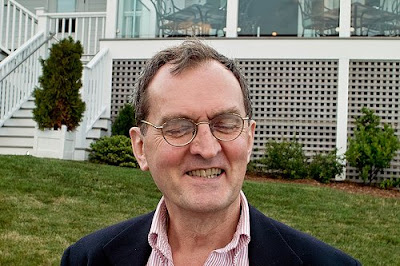 why did Derb write The Talk at this time?

The Talk is a response to the Talk black parents are recently reported to have with their boys. Commenters are suggesting that Derb's essay is a parody and a complaint similar to people who are complaining about the bias in the original Martin & Zimmerman photos. I think it's obvious there's some sort of reaction here, but also a serious opinion. Derb's essay has a quality that says he isn't just making the hypothetical case "what if a white person said what this black person just said."

The Atlantic goes to lengths to demonstrate that Derb has a history of racist statements that have been ignored by NR's editors, but de-contextualized quotations notwithstanding, The Atlantic article was apparently written by someone who is not familiar with Derbyshire's writings. Derb is actually a measured and careful thinker--a math geek as I said--who is entirely unsentimental but concerned about the potential impact of counterfactual beliefs about such an inflammatory issue as race. The Atlantic fails to note, for example, Derb's recent warning that current denial of social science data could result in a divisive racist backlash among the upper middle class elites.

Derb's views are more nuanced than his critics can allow. Gawker's title "Most Racist Article Possible" sets the tone for the criticism. Importantly, all of The Talk's bullet points address either questions either of probability or of the vagaries of living in a society where one's career can be destroyed for accusations of incorrect thought. What's interesting is that I haven't even seen yet a critic who has bothered to say that Derb's advice is, statistically speaking (because that's how the Derb rolls), not more likely to keep you safe and successful. 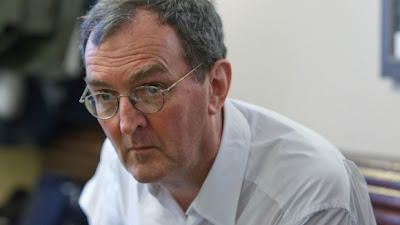 As I pointed out recently, Derb has cancer. I don't know his prognosis, but he's recently been revisiting his childhood, writing about his dead mom, thinking about the end of western civilization, and ruminating/fantasizing Buchanan's ouster from MSNBC. He recently started a RadioDerb broadcast with the line
"this is my last contract with NRO"
and ended one with an Irish song that concludes

"Ah, but I'm sick now, my days are numbered so come all ye young men and lay me down."

In short, sick or not, he's in a morbid and fatalistic mood.

On the recent NR cruise I took, Derbyshire was on a panel discussion on pessimism in conservatism. He re-stated some of the points from We Are Doomed, but he didn't bother to engage any of the "optimistic" panelists. It felt like he had been over the points before with the others present and wasn't interested in arguing anymore. My guess is that Derb works on the assumption that he's going to be the target of a putsch at some point.

And my guess is that The Talk is doing just what Derbyshire would like it to do. If you want to understand, read Derb's comments at CPAC and on the coming end of multiculturalism. His view is that it's only a matter of time before science trumphs the dogmatic denial of science, and that the sooner we can deal with political questions rationally, the better we'll be at avoiding the social, political, and economic disintegration of the nation. The Talk is opportunistic, but it isn't a screed. It's an intentional attempt to get people to engage with the problems Derb sees coming on the horizon by piggybacking on some current popular news.

Somehow, this post became the #7 Google search result for "Derbyshire The Talk": 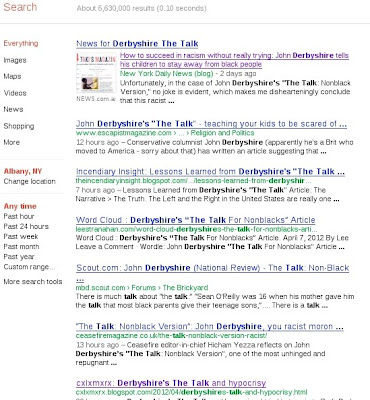 Also, Rich Lowry of National Review announces that Derb has been booted, as I suspect he expected. (Download the last episode of RadioDerb soon, before it's gone!) I, for one, will probably let my NR subscription lapse soon. Not out of retaliation, but because there's not much point. The main reason to read the magazine in recent years has been the columnists, of which Florence King and John Derbyshire were two of the best, and both are finished now.

I understand this editorial decision on NR's part. There really wasn't any other choice. It's a shame, though, because now Derb's voice is going to be relegated to publications like TakiMag, which is provocative, but also frequently wrong and embarassing. Lowry is right that Derb's association with NR gave a mainstream veneer to Derb's writing. Derb deserves to have a mainstream veneer as his lack of dogmatism and interest in science and research in fields both related and unrelated to politics were a welcome addition to the intellectual smorgasbord of the conservative movement. Only Razib Khan fills a similar role (and aren't we all waiting for him to weigh in, too?).

Derbyshire will probably be hurt personally in all this, too. I can't say I agree with all his points in The Talk, either. Much of the essay is simply impolite, but I can't agree with his approach to personal relations, such as manipulative friendships or ignoring those in obvious distress. And his comment about vetting politicians probably had as much to do with being burned by his recent early endorsement of Hermann Cain as anything, and was I suspect a mistake that he doesn't entirely believe himself.