Derbyshire: somebody set us up da bomb

As I was writing about Derb's The Talk, someone I know (let's call her "Hair Red") was escorting a school class in Florida.

I try to avoid talking about politics with her, but, when she returned, we talked on the phone and she told me about some local yokels, who were making rude comments about her class, who were the same age as Trayvon Martin.

This circumstance was compelling because Derb's advice in The Talk's bullet point (10a-e) applied to the situation my friend was in as well as the situation of the local yokels. I like and generally agree with Derb, but who did I agree with here--Derb vs Hair Red?

Well, frankly, Hair Red. I agree with Derb that, statistically speaking, your chances of being in danger at any given event are greater, but, without compelling data, I can't say I would feel threatened by being at a public event like a sports competition while a group of black highschool kids were there. Even if they were rowdy. Even if they were very rowdy. I might feel annoyed if they were very rowdy, but I wouldn't feel threatened.

I'm comfortable, morally and in terms of social niceties, with my instincts. I wouldn't feel safe in a poor, heavily black neighborhood in a major metropolitan area, especially at night, but I also wouldn't attend a soccer game in England for wanting to avoid soccer hooligans. (When I was visiting England years ago, I was actually trapped with some drunk soccer hooligans post-game in a train car. They yelled, sang, and argued. They eye'd me. I, a foreigner, was alone. I wouldn't repeat that experience.)

Now, if you're the same type as Barro, you probably think this is a no-brainer... of course, you can't feel threatened by any group of black youths... that would be, ipso facto, racist.

This post is about how that attitude, through its sheer stupidity and the exasperation of dealing with its ubiquity, can lead otherwise well-intentioned people into mental errors.

Dewey: you have no chance to survive make your time. Ha ha ha ha....

If you're like most Americans, you think Barro's no-brainer is not only morally correct but also sensible, because you've been raised in an educational establishment dominated by educators who are in compliance with the dominant state ideology.

It's difficult to describe to someone who's inside this cave how to get out. I can say only that for me it happened by reading about animal liberation. Once you start to engage seriously with the idea that people really are intelligent animals rather than a special class of beings outside nature, it can start to change your view of society. Maybe the walls start to melt, maybe the heavens rend, or maybe--as I think happened with Derb--you start seeing lots of data points. This is my fantasy about Derbyshire: when he sees a news story like "couple stomps elderly man to death amid domestic dispute," he sees something like this: 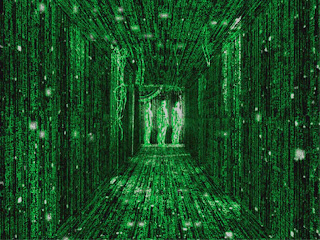 Imagine for a moment that you're in the jungle and surrounded by a bunch of apes. You don't quite know the rules in the jungle. You can sense that something is wrong, but you don't know if you're trespassing or what, and, mostly, you don't know if or when you're going to get set upon by this troupe of your cousins, who could take advantage of you at any time. This is essentially what Wall Street is like for me and most Americans. I don't quite have a good enough understanding of finance to keep my finances safe around those investment apes. But in fact all cities and all of human society are only larger versions of the same thing--concrete jungles full of apes.

Editor: I left off writing this post at this point, and now I don't remember all of what I was going to write.  But I do remember it was on the theme "All your beliefs are belong to us".  Hence the post title. I think the analogy of modern life being like concrete jungles where you have to constantly be aware of when you are out of your element is a good and analogy, so I'll just leave it here and post as is...
posted by Chris on Thursday, April 12, 2012
Newer Post Older Post Home