In this book originally published in, I believe, the 1970s and re-issued in 2003, the authors take issue with what was then and still seems to be the widely held assumption that the behavioral effects of alcohol are due to disinhibiting of alcohol on the brain. In place of that model, they propose that behavior when drunk is learned and socially conditioned. Much of the book contains examples from around the world of cultures in which the behavior of people when drunk does not conform to our expectations of drunkenness. The book concludes with an examination of Native American alcohol abuse tries to put that in a cultural-historical context as against the widely held notion that "Indians can't hold their liquor." 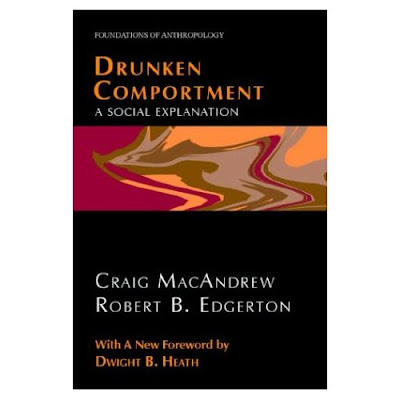 While there is definitely some truth in the book, it is not a thorough success. Their cultural examinations are both interesting and informative. To give an example that does not appear in the book, the Japanese now or in the recent past had a habit of going drinking with their boss after work. During these drinking bouts, people were allowed to say things to one another that would not be acceptable in a state of sobriety. This is what the authors call a "time-out," and is the purpose they say alcohol serves in most cultures. This part of the book is very believable. There is no doubt that alcohol can serve as a "time-out."

However, the authors are also transparently at the task of blaming the conditions of Native American alcohol use on Europeans and European culture. If NA are universally violent while drunk, it is because they learned that this is how drunk people act from being around fur traders, frontier soldiers, etc. This is a thin argument. As the authors themselves point out, the violence perpetrated by drunk NA was simply perpetrated by sober NA before the introduction of alcohol by Europeans. So, what Europeans introduced was social restraint with "time-out"s for violence, a net improvement I think most people would say over constant violence.

Another problem the authors don't really address is the fact that most the alcohol "time-out"s they site from South American, Asia, and Africa are connected with cultural rituals, whereas NA would simply drink and get violent when alcohol was available. This poses two problems for the authors. First, if alcohol and rituals are connected in "time-out," is there is a reason to believe that "time-out" occurs when not connected to ritual. The experience of modern bar-goers will demonstrate that people all act very differently when drunk, and also differently when drinking alone as opposed to in groups. Is it possible that some people simply are disinhibited? Second, if there is no ritual reason for drinking, and drinking results in murders and other violence, the question arises why people would seek out alcohol.

Also, the book essentially addresses only the problem of binge or group drinking. The loner dependant who buys up his family's food and education money in booze does not fit into this model.

However, the general point that there are at least some cultural learning effects on drunken behavior is no doubt true. And that point has definite suggestions as far as public health and policy are concerned. I don't know what happened to this theory of alcohol abuse in the decades since 1980 or the years since 2003, but I think it is a good book for nurses to read. Especially those who live ethnically diverse communities where they may be dealing with alcoholics from very different cultures.
posted by Chris on Saturday, April 14, 2012
Newer Post Older Post Home