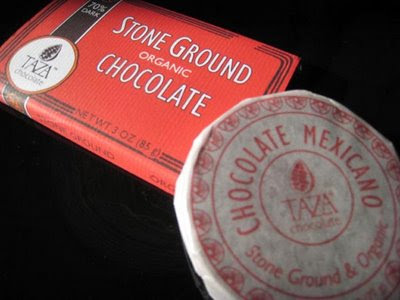 I've gotten tired of things like Lindt, which I find to be over-hyped. There's a lot of disappointing chocolate out there. And you usually end up eating more than you want/need when the quality is low. At least, I do.

I had some Green & Black's a while back and thought it was pretty good, so I went to the local food co-op only to discover that they weren't carrying it anymore. Not green enough? Too pricey? Who knows. Anyhow, the proprietress suggested I try Chocolove, and the co-op also had a "stone ground" chocolate in nice packaging (as seen above). So, I picked up 33% and 55% Chocolove bars, and the 70% stone ground bar, which is made by a company called Taza.

The Chocolove milk chocolate was disappointing (hard dry texture, with excessive caramel-like flavor and weak strength in general), but in their defense, I noticed too late that it was marked "Best if sold before January 2009." The Chocolove dark chocolate was fairly okay (sell by May 2010).

But not one to trust in my own instincts after being raised on Hershey's and Lindt--although here I have to digress to say that I was an early recognizer of the fraud that is Toblerone, though other peers in my hometown thought it was great when newly imported some years ago--I decided to wait a couple days and try it again.

Again, bleh, but not quite so bleh. This time, after two pieces each of Chocoloves and 2 of Taza, I had had 6 pieces of chocolate and was unsatisfied, so I went online to find out more about chocolate production and discovered that, while I always thought chocolate came from a bean/plant similar to coffee, it actually comes from the seeds of big pods that look like this: 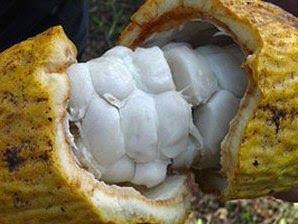 I tried two pieces of Taza again tonight after dinner. Okay, I can see how this might be enjoyable, I thought, but I'm still not getting it. However, after a little reading on the subject, I discovered that Taza's flavor comes from its relative lack of processing. It is lightly roasted and not treated to blend the cocoa butter as much. Actually, the whole thing makes sense to me. When I was a Boy Scout, we went on an overnight wilderness survival trip where we tried to scavenge acorns for dinner. Oh my goodness, they are horrible!! If you don't roast acorns, they have an overpoweringly sharp bitter/sour quality. We tried to boil it out, but no go. The cocoa seeds must be similar--if you roast them long, it removes more of the sharp qualities. A lighter roast leaves more of the seed's inherent flavor in the chocolate.

Anyhow, after more consideration, I came to the conclusion that Taza is neither better or worse than other fine chocolates. It is something a little different. And I've been pleased to see that other more knowledgeable reviewers essentially agree with my assessment of the taste:
David Lebovitz: "decidedly on the fruity side rather than 'roasty', like so many other chocolates."
Casey Meshbesher: "the flavor really is a barrage of fruity juices, champagnes, and vinegar."
(Well, I don't know about champagne, but fruit and vinegar sound right.)

In addition to Taza's chocolate bars, they also offer inside views of their chocolate-making process on their website and sell roasted or unroasted cocoa. I think it would be fun to be able to have a spread of unroasted cocoa, different roasts of cocoa, and the pure chocolate made from them, all from different growers, to be able to taste the differences that the processing imparts. Maybe when I win the lottery.
posted by Chris on Wednesday, February 04, 2009