Press play before reading on...

Tomorrow is Ash Wednesday, the start of Lent. Today is Mardi Gras, and I guess Carnival has been going on in Rio de Janeiro, Brazil, since the beginning of the month... 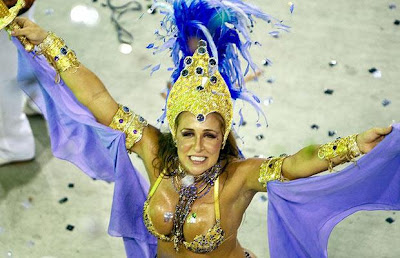 Everyone dresses up in costume. Of course, someone had to dress up like a sexy nurse (boring), but there were also all manner of interesting costumes and floats, as displayed in this great Telegraph photo set. 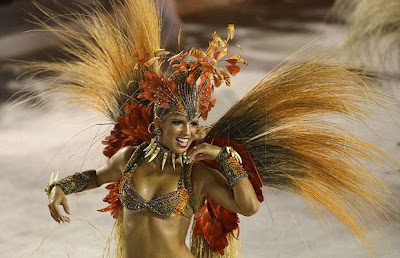 Brazil's president was present at the festivities as well:

President Luiz Inacio Lula da Silva spent eight hours watching the parades staying till 5 a.m. At one point, he tossed condoms down from his box seat onto those parading, taking an active part in a government anti-AIDS campaign to distribute 65 million prophylactics this month.

The two samba dancers chosen to dance at the head of the parade this year were older women, which is making some older women happy, although honestly, if you take a look at the photos from that Telegraph photo set above, you'll have to agree that their "older women" don't like the older women you see in your local Wal-Mart.

And of course, there are always job openings for nurses at Carnival. Actually, I am surprised at how much experience and certification they want. I guess you sort of have to rely on yourself, although you would think they have telemedicine by now...

The Ship's Nurses are responsible to care for the nursing needs (routine and emergency needs) of the guests and crew. Registered Nurses with valid registration in the United States, Canada, New Zealand, Australia, South Africa, Ireland, or European Union country with a minimum of three recent years of emergency or critical care nursing experience with competency in emergency/critical care nursing care are eligible to apply. Current BLS certification is required. Current ACLS certification (Advanced Cardiac Life Support) or its equivalent, is highly recommended. Some willingness to learn simple laboratory/x-ray procedures. Must be proficient with IV cannulation and venipuncture.