Although I have for the most part sworn off film, I am still a sucker and went to see Midnight in Paris today after its positive TakiMag review. 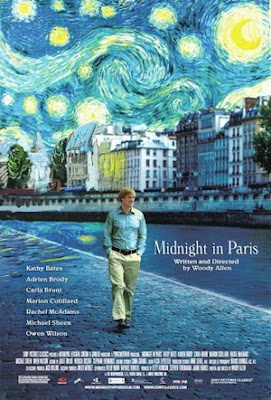 In addition to the sordid personal life that adds fuel to the Carthaginian fire of Hollywood celebrity news to which the public's exposed, Woody Allen's been making entartete kunst, like Vicky Cristina Barcelona, aimed at the core of civilization. So I haven't paid attention to him, specifically, for a while. Apparently, he's been suffering from "old man syndrome": as this photo shows, he is now indistinguishable from the elderly Alec Guinness. 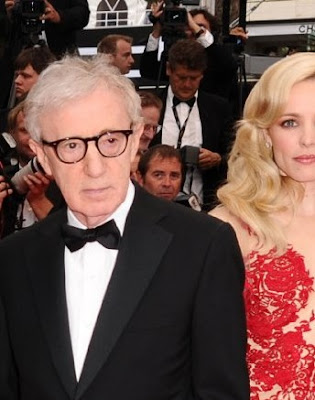 Midnight in Paris, however, was a delight. More focus on sexual betrayal, death, and the meaninglessness of life, but with just the right touch of nostalgia so that the film actually critiques the modern world's approach to these subjects rather than simply being a bellows.

As you probably know, the Woody-Allen-stand-in played by Owen Wilson is an aspiring writer who vacations in Paris and is picked up by a taxi-cab from the 1920s every midnight. Awe and hilarity ensue, and Wilson realizes he can't love his fiancee, who is a Malibu bimbo*. Humor-wise, the best part of the film (spoiler alert) is when Wilson gets into a cab with Eliot and tells him "Prufrock's been like the theme of my life..."

Slightly less obviously, the film is Allen's nose-snubbing at the rest of the world. Wilson is a self-effacing writer who, nevertheless, won't let anyone critique his novel until he meets Hemingway and Gertrude Stein. The implicit message here is that, unlike the Tea Partiers and hoi polloi of the U.S., Allen is a Real Artist, whose work is fit to be judged only by his peers, the other great artists of history. We'll see. Barring the Singularity, I suspect Picasso will still be known in 50-100 years, but Allen forgotten.

Midnight in Paris is filled with references to giants of modern literature and art. Allen throws us some bones, but if you don't get the joke about Prufrock above due to not knowing either Woody Allen films or T.S. Eliot, you aren't going to enjoy this movie.


* My favorite joke from college courses was by James Kurth, who used to say that if you tipped up the East Coast, all the nuts and fruits in the U.S. would roll out of California into the ocean. Great double entendre humor in which the plain meaning is less obvious than the hidden one.
posted by Chris on Tuesday, October 04, 2011
Newer Post Older Post Home