I haven't actually watched this show, Nurse Jackie, on Showtime. I don't have cable TV, and I barely watch TV anyhow. But judging from adverts and photos, I am guessing that she fills a special place in the world of nursing stereotypes. I bet she's not Handmaiden, Battleaxe, or Angel. She has a special role all her own: it's called "Bitch." Yes, bitch. 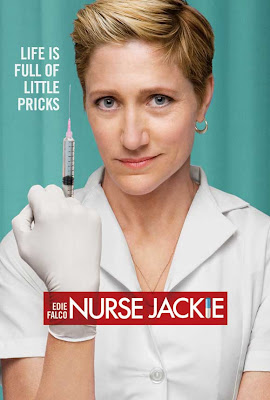 You see, if you are producing a TV show about nursing in the US, you have to choose to build on one of the available stereotypes. Nurse Jackie's not male or English, so the Gay and Matron stereotypes are right out. The Handmaiden stereotype is not PC. The Angel stereotype would make a boring TV show and will never again be used as the basis for a film or TV character unless it's an Evangelical or Catholic production company. This leaves the Battleaxe. It's obvious from the advert above that this is the stereotype the show has used to build their character. Just look at the syringe and needle. It's a dead give-away. Anytime a nurse is holding a needle in a photo, the message is "I'm going to cause you pain." (Incidentally, have you ever seen one of the those old nursing romance novels where the nurse is holding a needle on the cover? No, of course not!)

The problem is that the show needs the support of nurses, or at least not to make nurses' unions its enemies, and no nurse wants to be a Battleaxe. So the show compromised by making her a bitch. Bitch is what the real-life Battleaxe calls herself. Where Battleaxes are partnerless and mostly friendless, the bitch is self-described as "independent." Whereas the Battleaxe lacks social graces, the bitch has "attitude." Whereas the Battleaxe sadistically, or least dispassionately, dispenses pain, the bitch thinks everyone should "man it up" because she's too vulnerable to express empathy. Whereas the Battleaxe is a dominating alpha-female, the bitch just causes people to feel exasperated instead of fearful.

The reason the Bitch is an acceptable variation of the Battleaxe for a TV producer is that many people equate bitchiness with equality, liberation, etc, etc. But Battleaxes, bitches, it's all the same.

Oh, I bet she's a nympho, too, but that's just for ratings.
posted by Chris on Sunday, April 03, 2011
Newer Post Older Post Home