A favorite indulgence of Paleo dieters is coffee. For a while I was getting a cappuccino with extra shots of espresso on the way to work. But all that milk is, well, not Paleo-ish. So one day a few months ago I ordered a caffè macchiato at Starbucks on my way, thinking to get all the caffeine with just a hint of the milk to take the edge off the espresso.

Macchiato means "stained," and the drink should basically be espresso with a dusting of milk foam on the topic. Made right, this is a strong drink. What I got served was something sickly sweet made with a caramel flavoring. Ack! So I gave up on Starbucks.

I noticed a couple weeks later that Dunkin Donuts had started serving espresso drinks. Yes, Dunkin Donuts. They've changed the decor and upgraded the offerings. How bad could it be? 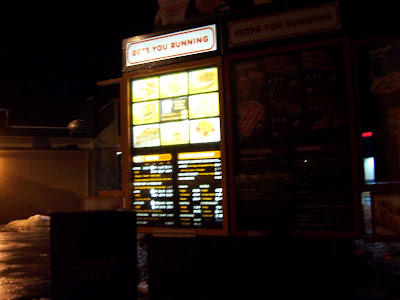 They made a slow start in my town. The manager had latte and cappuccino reversed for a while. And they don't offer macchiato. But then I discovered that they offer "Turbo Shots," which are shots of espresso that you can add to any drink. This presented an opportunity for hacking the menu. After all, if you can have a Turbo Shot in a cup of coffee, why not a Turbo Shot in a cup?

You might have to negotiate this. It took me a while sitting at the drive-in window in the middle of the night to explain what I wanted. What we settled on was this: three Turbo Shots in a small paper cup. 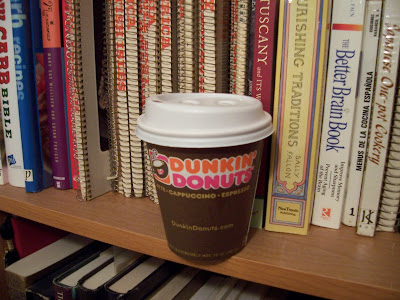 The Turbo Shots have a not bad flavor; strong but not charred, like another chain we know of. And if the coffee makes it to work, you can add a few drops of half & half or creamer. I dub this drink the caffè ghettiato. (It may not be the catchiest phrase, but ghettoccino was taken, and macchighetto doesn't work at all.)

The ghettiato is a good solution for Dunkin Donuts. DD is open all night, ordering the plain espresso avoids getting skim milk or HFCS , and the Turbo Shots are cheap. A splash of half & half smooths out the flavor.

So next time you are on your way to work the night shift or get an after-hours hankering for espresso, remember the ghettiato, the DD hack that's cheap and Paleo-compliant.
posted by Chris on Thursday, April 28, 2011
Newer Post Older Post Home