The amount of trash produced by a hospital

Recently I've been thinking a lot more about stuff. No, I don't mean "about stuff," but about "stuff," all those objects bumping around in homes and in and out of our homes. I've been reading books like The 100 Thing Challenge by GuyNamedDave and Unclutter Your Life in One Week by Unclutterer, and I've been watching DVDs like No-Impact Man by No-Impact Man. Google reminds me that today is Earth Day, so let me write a little about this topic.

Everything I own fits in one room, and I feel like I have too many things. I try to cut down on waste and reduce my consumption, but I feel like a spend-thrift mostly. Ultimately, this is personal. The compulsion to downsize, organize, and stop buying--reduce, reuse, recycle--reduce, refuse, rejigger--is innate. It's my default setting, not something learned I do. So for the most part I don't push it on people and don't hold it up as a standard of behavior. However, consumption and waste are economic and social problems, and people should give them some attention even if they aren't ready to make changes themselves.

To get a sense of the amount of waste that is produced, an excellent start is a TED talk by photograper Chris Jordan. Mr. Jordan makes photographs composed of repetitive images of individual objects. To me, the most striking is his photograph of the disposable paper cups used in a day in the United States. The photo can be seen on his website. The U.S. uses and throws out 410,000 disposable paper cups every 15 minutes. This would make a stack every day that would form a wall 42 stories high and maybe a city block wide. Every day! As he points out in his TED talk, if you add an item for scale, the pile of disposable cups the U.S. uses every day would dwarf the Statue of Liberty. Observe: 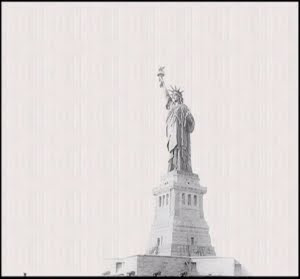 Waste is nowhere a bigger problem than in health care. As you know if you work in health care, literally every single thing that's used on a patient is packaged in a disposable plastic container, and most of the items are disposable themselves as well. Health care waste management is an enormous industry itself, and will even be having its own industrial conference coming up in early May in Texas.

To give you some perspective, my household of four produces about 4-5 bags of trash every 2 weeks. (Most of this is composed of the individualized and non-reusable packaging of milk cartons, cuts of meat, toiletries, etc.) That means I personally produce about one-tenth bag of trash per day at home (that's 5 bags of trash divided by 14 days, divided by 4 people). In comparison, at work I produce 1 to 2 bags of trash per shift, or 10-to-20 times as much per workday. It's even more of a shock looked at from the patient's perspective. 1-2 bags per shift means 3-6 bags per day. So I estimate the average hospitalized ICU patient produces 30-to-60 times as much trash on a daily basis as a non-hospitalized person.

How much is that? Well, my city is about 2.25 miles in circumference, or about 12,000 feet in circumference. At this size, if each trash bag is 1 foot wide, the hospital could build a wall of trash around the city that is 15 layers deep every year. Honestly, I don't know where all this trash goes.
posted by Chris on Friday, April 22, 2011
Newer Post Older Post Home