Last month, I posted on Freedom, Not Fear Day, October 11. Now Der Spiegel has posted photos of the TSA's new bodyscanning systems. If you peruse the photos at SpiegelOnline, you'll see that it appears they can set the scanning to examine a person's body at different levels of depth. The photo below shows revealed musculature, while other photos show a more superficial view of the body. Should nursing have an opinion on this topic?

If one interpret's Henderson's definition of nursing broadly, it could be taken to include interventional political and legal action for some groups of people. But is there another basis on which nurses should oppose this level of scrutiny? I assume that the scanners have been deemed medically safe. What about a view of fascilitating the integration of the individual vis-a-vis Maslow's hierarchy or another ascending theory of humanism? Actually, I'm unconvinced that nurses should find a professional theoretical basis for opposition to surveillance that does not intrude on a person's health care. However, it's hard to look at the body used in this way without thinking that nursing should have some perspective. 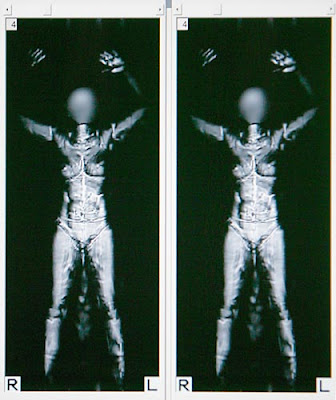 via BoingBoing
posted by Chris on Tuesday, October 28, 2008