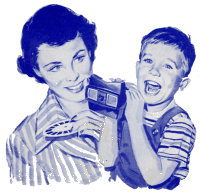 Remember the View Master? I remember it fondly, although I never had more than a few story lines to look at. Apparently, some researchers used the technology to make a library of 3-D anatomical imagery. These images are now going to be available online (for a price!). More:

'It was Bassett’s genius for dissection that attracted the attention of William Gruber, the photographer who invented the View-Master, a stereoscopic viewing device familiar to most children. A 17-year collaboration between the two resulted in the production of the Stereoscopic Atlas of Human Anatomy begun in 1948 and not completed until 1962. It consisted of 221 View-Master reels with 1,554 color stereo views of dissections of every body region. Each stereo view was accompanied by a black-and-white, labeled drawing and explanatory text.

'“It was very popular nationally,” (curator Dr. Robert) Chase said. “When Bassett first showed the images, lines formed around the block to see them.”

'“Although they’re 50 years old, the pictures were taken with high-resolution Kodak film,” said (anatomy professor Paul) Brown, explaining why the images have held up over the decades. “This is what they looked like before we got them,” he said holding up the original View-Master reels. “One can see how the nerve enters the jaw. It is possible to see inside of the sinus cavity. Look at the quality. It’s just fabulous.”' 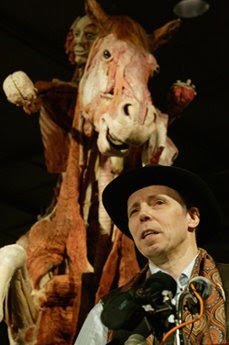 I wonder if the release of these photos was met with any of the denunciation that accompanied the BodyWorld exhibition. I doubt it. The 1950s-1960s were a time of much greater faith and generalized interest in science--it wasn't nauseatingly ubiquitous the way it is now. Also, there is something about the BodyWorld exhibition that fails to satisfy inquisitiveness yet does not rise to the level of art. BodyWorld doesn't actually invite us to investigate closely, nor does it impress aesthetically. It seems to be an interest born out of interest in death. The point of the exhibition seems not to be to generalize from the plasticized corpses, but to constantly have in the back of one's mind this is an actual dead person. I can understand the criticisms.
posted by Chris on Saturday, April 26, 2008