In physics, it's accepted to create a model and hypothesize something never observed in nature in order to make nature fit the model. The Higgs boson is a famous example. Planets are also hypothesized to exist based on "shadows" in gravity.

Now Paul Jaminet of Perfect Health Diet hypothesizes never before observed* functions of the nervous system in order to fit the body to his theory of obesity. In a January 5 post, he suggests that the body regulates food cravings and energy partition based largely on its lean mass. In order to do this, it would have to monitor lean mass somehow. And since we don't know of any way that the body does this, and since, according to Jaminet, hormones are inadequate for this purpose, the body must get feedback about lean mass through the nerves. Specifically, Jaminet writes " there are no known hormones for this and I think it’s obvious that hormones could not do the job. So it must be via nerves, by process of exclusion." So nervous system feedback is the Higgs boson of obesity--a hypothesized physiological function waiting to be found in order to confirm a theory of obesity.

To be honest, I haven't read PHD, so I can't speak to it. But since Jaminet is rolling out his theory of obesity now on his blog, I assume it isn't central to the diet. But I agree I should read the book now. Nonetheless, here are some thoughts on obesity's Higgs boson...

Terminological deficit: "quantity and quality of lean tissue". In order to make this theory whole, Jaminet needs to define what he means by his remarks on lean mass. What constitutes lean mass? Only skeletal muscle? What about internal organs? What about bones? What does quality mean? Since Jaminet's post uses Tara Parker-Pope's article as a starting point, is he implying that quality means Type II muscle fibers, instead of the Type I fibers that the article says the body defers to under weight loss conditions? And what about quantity? Is he suggesting that the nervous system reports on absolute quantity or only relative changes in anabolism and catabolism?

If lean mass is that important, getting hungry only after muscle wasting is not good. Jaminet proposes a theory that makes lean mass a priori very important. As opposed to the hormonal systems, neurons are very fast. If lean mass is so important, why would the body develop a fast system that up-regulates hunger in response to muscle wasting? Muscle wasting = already too late. This would be like if your reaction to touching a hot stove kicked in only after you were on your way to second-degree burns.

How would the body distinguish between relative and absolute muscle mass vis-a-vis work? I don't mean mechanistically, I mean conceptually. In other words, a strong massive man who loses weight is still, after some muscle wasting, able to perform much more work than a mousey thin woman with stable muscle mass. Would it really be in a body's interest to drive the man to eat more? (Remember that in evolutionary terms, hunger=drive to kill a mammoth, or at least run down antelope, not drive to grab bag o'chips from kitchen.) Is the body so dumb that it can't distinguish?

If muscle wasting is that important, why does the body prefer burning muscle before fat? As you probably know if you read about Atkins or ketogenic diets, the body's fat-burning mechanisms don't really get ramped up until starvation is established. Before that, the body preferentially catabolizes muscle. If lean mass was--a priori--so important, doesn't it seem likely that the body would preferentially burn fat stores? 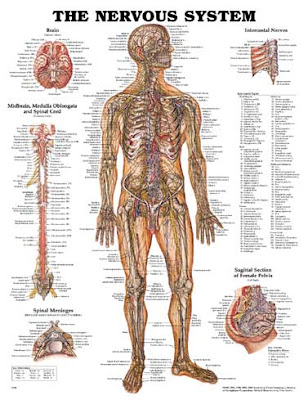 Much sensory input is from specialized and localized nerves. For example, taste is found only in the oral-nasal space of the head. You can't taste with your toes.

This makes the nervous system much different from hormones, which think globally, even when they act locally. For example, insulin production, although occurring in the pancreas, is regulated by sampling global blood sugar. Leptin, produced in adipose tissue, regulates energy input for the whole organism.

The nervous system is also different from hormones in being confined to tracts of neurons. When you want to move your arm, only certain neurons will do the trick, whereas if you want to run away from a tiger, your adrenals will dump on all your tissues.

One of the characteristics of neuronal tracts is that they can be mapped, which is why a nice chart like the one above is possible. Hormones can hide out because we don't necessarily know how to chart them or where to look for them if we don't know they exist. This is why Leptin wasn't discovered until 1994. But the PNS starts or ends in the brain/spinal chord.

Although there are some lesser known aspects of the nervous system, such as the enteric nervous system (which you might not even cover in A&P), the PNS is pretty well mapped out and explained by physiologists, just because it can be mapped out. Even brain tracts are mapped onto the PNS. For example, achey pain and the Paleospinothalamic tract.

If there is a completely formerly unrealized function to the nervous system, such as monitoring of lean mass, it is problematic that the nervous system is, by odds, more thoroughly described than the hormonal system. Although there are some aspects, such as proprioception and delayed onset muscle soreness, that are a little bit outside our normal nociception, the idea that there are whole functional categories that we don't know about is unlikely.

In addition to physiological considerations, there are questions from pathophysiology, too. For example, if satiety is connected to the "quantity and quality of lean tissue," wouldn't people with degenerative diseases like muscular dystrophy be in a state of constant hunger, or least more frequently hungry and less satisfied by food? Or what about rhabdomyolisis? Wouldn't people in rhabdo be observed to have increased appetites?

And what of brain lesions? If lean mass is monitored by the nervous system, then there are tracts in the brain that relate this somatosensory information to satiety. And that means that it should be possible to induce decreased satiety through lesions. Is there any evidence of this?

Finally, it seems like bodybuilding would have definite effects on satiety. Either bodybuilders, by constantly breaking down muscle, would be in a satiety deficit, or, by constantly rebuilding muscle and by virtue of their mass, would be in a constant satiety surfeit. As far as I know from experience and reading, although bodybuilders may have cravings for things they won't let themselves eat, they aren't constantly hungry. And it seems very unlikely to me that their cravings are due to malnutrition considering the amount of supplementation and the fact of anabolism.

Jaminet writes in the comments section "Evidence – it’s clear to me from personal experience that the brain does sense tissue quality." I.e., evidence=anecdote. I'm all for self-experimentation a la n=1 philosophy. However, it's not science. Proposing new, undiscovered territory in physiology on the basis of "personal experience" is somewhere between audacious and foolish.

Like the Higgs boson, the way to test Jaminet's theory is to look for the hypothesized, the nervous function related to monitoring lean mass. This is the equivalent of building the LHC. But there is an indirect and much easier way to see if there is anything in this theory.

If Jaminet is correct, it seems to me that the weight-loss-induced-hormonal changes that correlate with weight-loss-induced-hunger and weight-loss-induced-caloric-efficiency, mentioned in Parker-Pope's article, should be absent in people who have lost weight on the PHD. So a relatively simple study could be performed comparing the hormonal profiles of PHD dieters with those of other types. The null hypothesis would be lack of difference in hormonal response to weight loss. If we can accept the hypothesis, then the likelihood of monitoring by lean mass very low.

* As far as I know. I could, of course, be wrong. But Jaminet doesn't seem to know of these nervous functions, either.
** Although it's now January 7 (one day after Epiphany, or Three Kings Day, the 12th day of Christmas), the Chritmas tree is still up. As I'm writing this, I'm enjoying the lights and one... two glasses of post-prandial port (following pre-prandial martini and prandial Tutidi) and was racking my brain trying to think how to categorize this: I was about to write "science-y problems". I hope the rest of this post isn't unintelligible. My apologies if it is.
posted by Chris on Saturday, January 07, 2012
Newer Post Older Post Home