Nanook of the North review

Growing up, my mother frequently called me "Nanook of the North" when I was outside playing in the snow. I thought it was a made-up term until she recently rented this documentary, which she had seen in an anthropology class as an undergraduate. 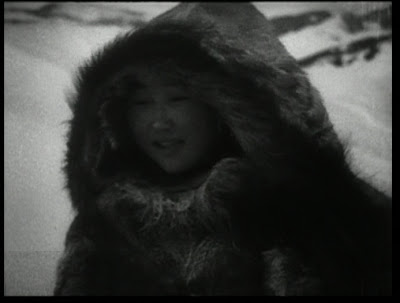 Nanook's wife
Nanook was an Inuit who lived in the early 20th century on the Hudson Bay, not too far from where we are now as a matter of fact. Nanook of the North follows him and his family as they go about their daily lives--fishing in the ice, killing seals, building igloos, trading furs, dog-sledding across the icey expanse...

The film was early enough that this is a "silent movie" documentary. Nevertheless, it is riveting. The lives of these people were active and demanding, but they do not appear to be in discomfort or emotional distress. In fact, they seem quite happy and jolly. And the techniques and tools they employee seem quite sophisticated considering their dearth of resources.

There isn't too much else to say. People who will enjoy this film know who they are. Thumbs up!
posted by Chris on Sunday, January 29, 2012
Newer Post Older Post Home