Images of positive Allen test due to lack of collateral circulation

I've decided to try to write a publishable peer-review article. In the course of doing initial online research, I came across this case study from Circulation:

A 27-year-old surgical resident from South America noticed occasional tingling in her right hand on awakening. She performed a modified Allen test on her own hands and noticed a subtle line of demarcation on the palm of her right hand accompanied by induction of similar tingling sensations. The demarcation was not seen on the left hand. We suspected an incomplete palmar arch, and to better demonstrate these findings, we wrapped the patient’s right hand with a latex bandage to exsanguinate the extremity. Assistants applied pressure to both the radial and ulnar arteries at the wrist as the latex bandage was removed...

After performing this Allen Test, the assistants were able to obtain the following results. Normally there is an anastamosis between the medial and lateral circulation called the Palmar Arch. Apparently, this subject's Palmar Arch was poorly developed! 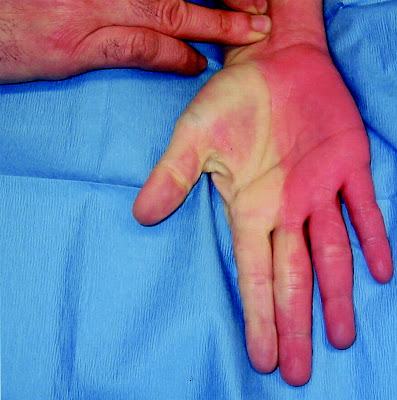 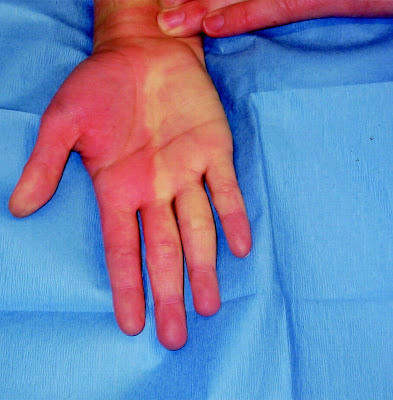 I had never seen a positive Allen Test before.
posted by Chris on Wednesday, January 04, 2012
Newer Post Older Post Home